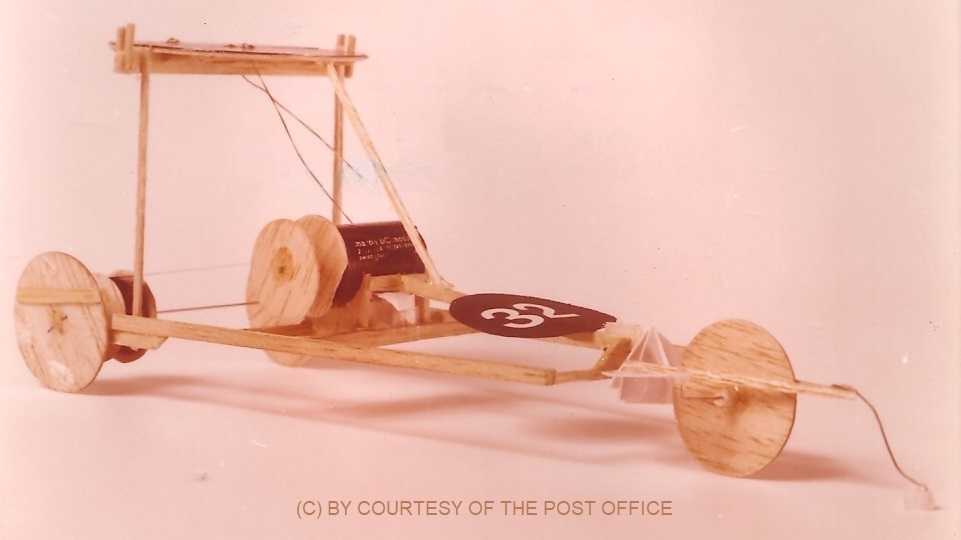 This page is all about our entry in the dragster solar powered model racing car Grand Prix held at the Design Engineering Exhibition, 5-7 Dec 1978, at the National Exhibition Centre Birmingham.

The Design Engineering magazine, together with the exhibition organisers, organised the competition to stimulate creativity and ingenuity amongst the readers of the magazine.

The challenge was to build a car that would race along a 20ft long track, underneath a row of light bulbs. Each car had to use a standard size solar cell supplied by Ferranti or Lucas and small DC electric motor supplied by Maxon or Portescap. The first 40 motors were provided free of charge.

We applied by telex message (those were the days !) and on letter headed notepaper (by post), promising to return the solar cell and motor if we failed to turn up. Only the first 40 entries would get free cell and motor. 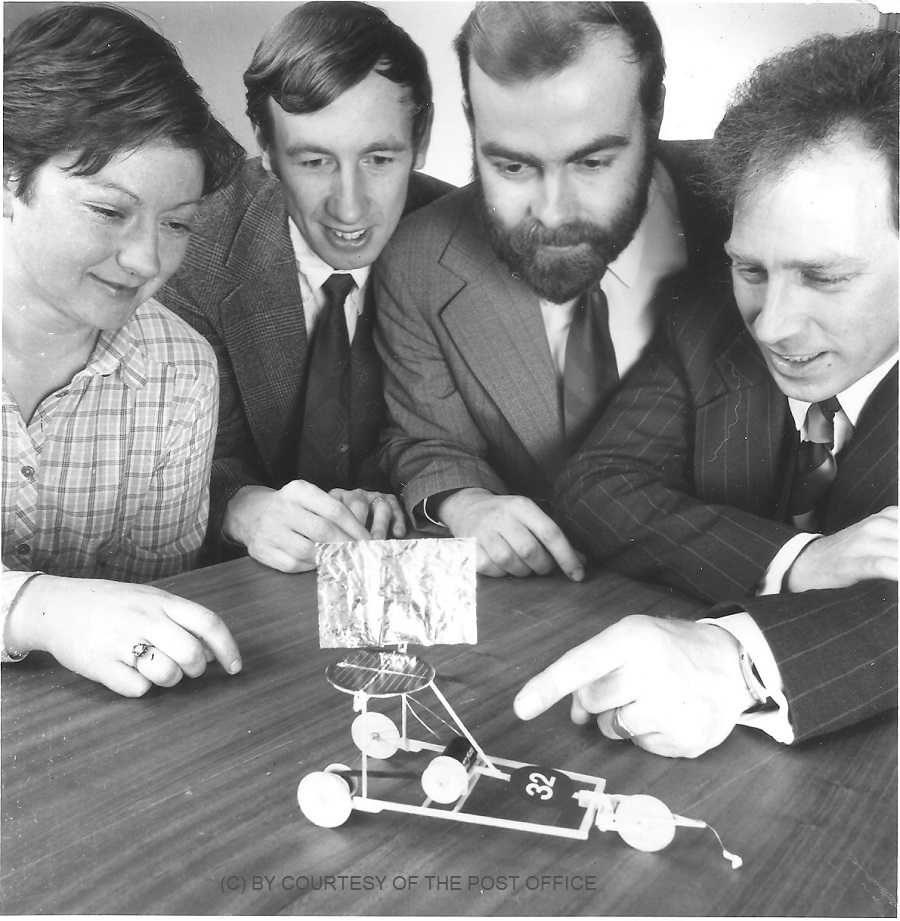 Several of us in Post Office Satellite Communications Development Divisions (TD3/10/13) got together and decided to compete. We were Margaret Hammock, Eric Johnston,  John Baldwin and Rod Kirkby.

Each car had maximum dimensions of 10 inches long and 3.5 in wide, with the solar cell 3in max height above the track.
The solar cell supplied was 2.25in diameter. Our cell gave its maximum output power at 354 mV and 59mA into a 6 ohm load. This gave about 20 mW of useful power out.

The track was 24 ft long overall and about 8 in wide, with a 2 ft start and finish area at the ends. Down above the middle was row of 100W clear light bulbs with the filaments 9" above the centre line of the course.   There were two sets of guides, so that 2 cars would race, side by side, in typical drag racing manner.  The guide track for each car consisted of two strips 1 inch wide and 1/8" thick, with a gap 3/8" between. 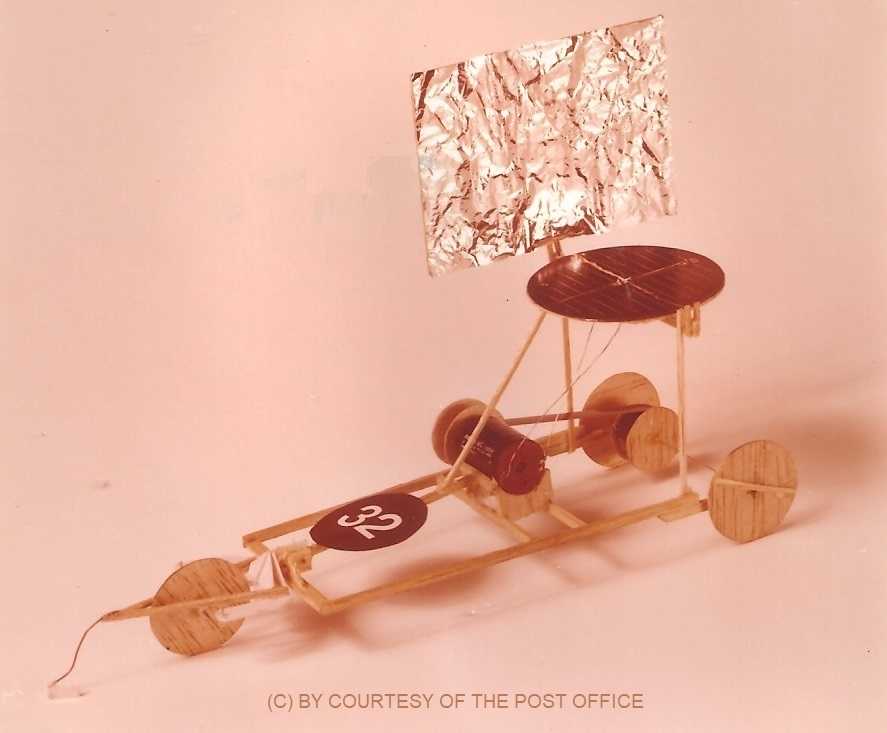 We considered the following:

The transfer of power to the wheels proved challenging. From the start we realised that some form of variable gearing was needed so that the motor could run so that it looked like a 6 ohm resistor all of the time.  In fact the motor behaved as a 3 ohm resistor when stalled and much higher than 6 ohms when free running, in both cases with zero power output!

To implement a gear system we decided to use variable outer diameter pulleys on the motor and rear axle with a tape between them which would wind off and on, thus varying both the diameters simultaneously.

We worked near on 24 hours a day and used a computer using 7 register memories for numbers and 50 memory locations for machine code instructions to simulate the run. Also vast amounts of graph paper. 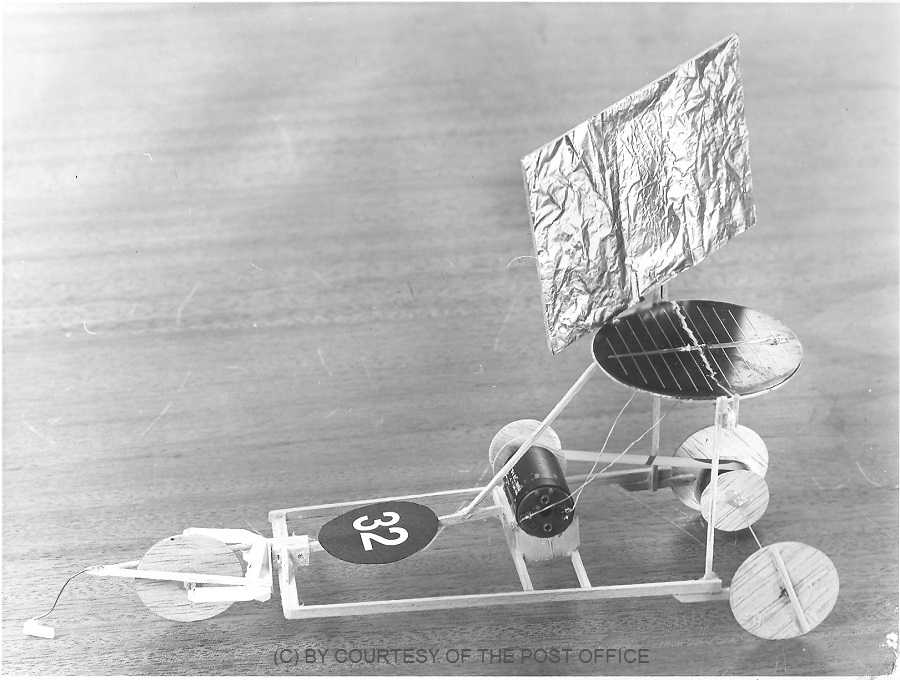 An example of one early tape design was:

The motor pulley started at 2mm diameter and the ended at 13.6mm dia.
The rear axle tape started at 18mm dia and ended at 12mm dia.
This gave a track time of about 7.7 seconds with 650 rpm and unbroken solar cell. 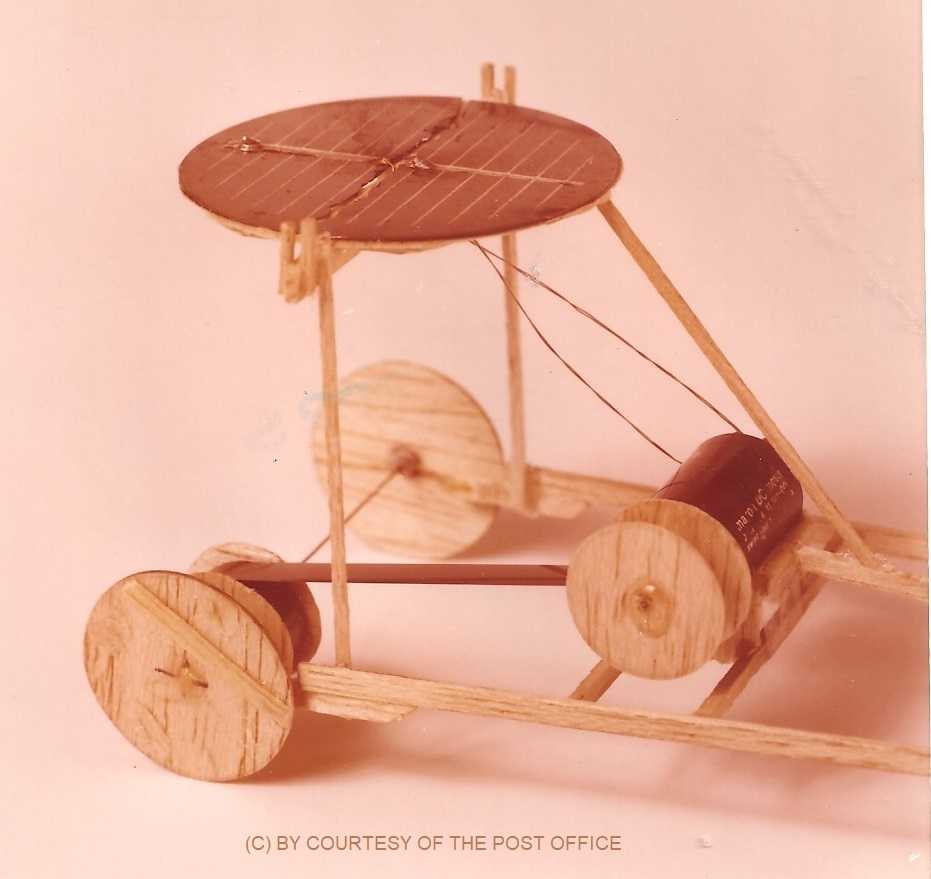 We used balsa wood as it was light and easy to cut, alter and mend. The suspension was tiny phosphor bronze springs, glued into to the balsa wood, with tiny brass nuts soldered to the other ends with solder inside, drilled to make oiled bearings for steel needle axles. 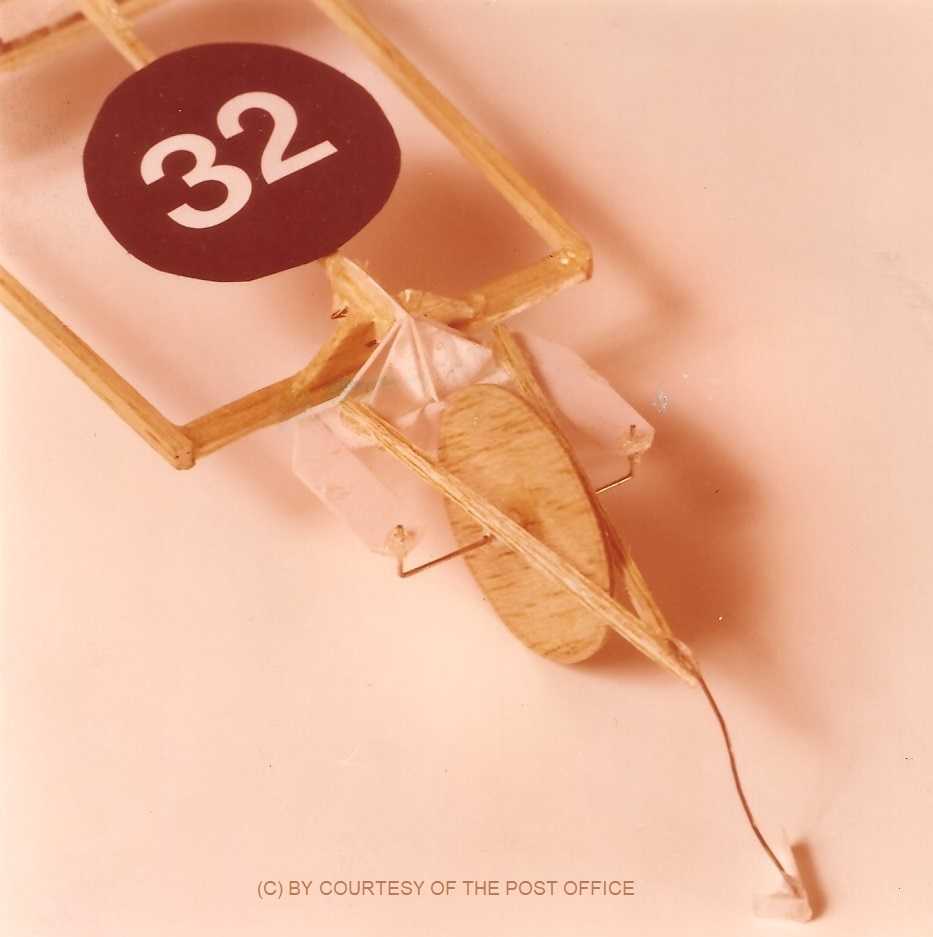 The steering probe at the front.

Guidance involved a low level probe out front, in the 3/8" groove between the guide rails.

The first day was time trials and it was a bit of an eye-opener seeing all the other cars. Many competitors were far more 'engineered' than ours, think carbon-fibre and laser cut filigree metal parts. One attractive model had fine metal wheels all beautifully made with holes for lightness. Maybe the design team included a watchmaker!  Our "Fred Flintstone" balsa wood wheels looked prehistoric by comparison. Our wheels at least had been sandpapered round and were probably lighter.

More significantly others has broken their solar cells and connected the two halves in series, were cooling the solar cells using freezer spray, or had added reflecting mirrors above the solar cell to gather more light.

The lengths of triple play recording tape with plastic card white self adhesive strips added to progressively alter the diameter of the motor pulley.

Frantic overnight redesign ensued. We snapped our cell in half and rewired it.  We took out the old standard play tape 'gear' drive and replaced it with a new thinner triple play tape with variable thickness implemented by attaching tiny self adhesive 1mm x 1/4 inch strips of plastic card at intervals along the tape to set the required diameter ratios at each distance along the track. This programmed tape worked well and we got consistent 3.6 seconds along our test track.

We tried other ideas that never came to anything.

We had a spare cell cut into about 8 strips and intended these to be located  in two lines underneath reflective mirrors so as to gather light from an area of 10 inches long by 3.5 inches wide. Would have needed 4 flat mirrors, each 2in x 10in. Failed due to construction, stability, air resistance and lack of time.

We considered putting a film over the cell with dry air inside and using liquid carbon dioxide. The idea was to stop the cell getting white frosted up with condensation ice and losing power. Lack of time. We used freezer spray and wiped the surface clear just before the start.

We tried a simple small reflector but it caused air drag and fluttered. I looked good though but was not used in the races.

On the day before the time trials the Industry Minister Eric Varley turned up to watch. Fortunately there were a couple of cars around to demonstrate. An amusing "Bionic Bathchair" from a team from the "The Engineer" produced respectable 15 seconds but Ina Bearing's car was more serious, achieving a respectable 6 seconds.

The first proper day of the races was the time trials day. It was a bad weather outside, with freezing fog and people were converging from all over the country. We got there and managed a time of 5.4 seconds. At the end of the day, after some extra time, 60 cars had run. The qualifying time was set at 9.4 seconds and we breathed a sigh of relief as we qualified into the top 32, ready to compete again the next day.

The TV people came from BBC PebbleMill and amused themselves with the thrills and spills of drag racing.

Afterwards is was back to London for very late night modifications.

Races were run with the 32 cars and this day narrowed the competitors to 8 for the final.

Again, back to London for late night modifications.

This was desperate stuff:

I think we really won 1 race, were dead heat in 2 races and lost the 3rd race, as our nose stuck out 1 inch in front of the car and as it was only 1mm above the track surface and in the groove and so did not trigger the end of the course sensor.

Rolls Royce used cotton thread to couple their rear pulley to their motor pulley. It appeared that their rear pulley was large diameter and of virtually constant diameter. Their motor pulley was sort of V or U shaped with curved sides to the V so that the build up of cotton thread in the groove caused the diameter to increase. I presume the shape of the curved sides was programmed to create the appropriate diameters as the car accelerated down the track. I wondered if the filling up of the groove might be prove uncertain.

Just think what could be done if we all pulled together...