The scientific name for Deptford Pink is "Dianthus armeria". It is normally a biennial plant (taking two years to grow and flower) producing a low level rosette of leaves (5 to 9 cm long) in the first year and tall (15 to 60cm high) spiky flowering shoots in the second year.  Occasionally it seem possible for the plants to flower in the first year. The five petal bright pink flowers are about 10mm diameter and appear in July - August.  The plants are relatively rare and the species needs looking after.  Helpfully, it is also grown as an ornamental plant in gardens, as well as occurring in the wild. People who have the plants are encouraged to help spread their seeds to promising locations.  Freshly bare disturbed soil on south facing slopes is suggested, such as road verges, railway cuttings, field edges and, of course, nature reserves. For more details about conservation plans and technical details about the species read here:

The Belton Hills Nature Reserve is one of the last remaining areas where the Deptford Pink grows. It used to be much more extensive along all the cliffs from Hadleigh Castle to Southend-on-Sea, Essex.  Members of the South East Essex Natural History Society have been instrumental in its conservation. What is needed is the clearance of some areas brambles and the disturbing of some of the soil surface in winter to encourage the germination of new seedlings.

Here is an image of an unusual Dianthus Armeria plant that is preparing to flower in the first year. (9 Sept 2011)  there are approx 120 leaves up to 10 cm long and 4 flowering shoots about 30 cm long. 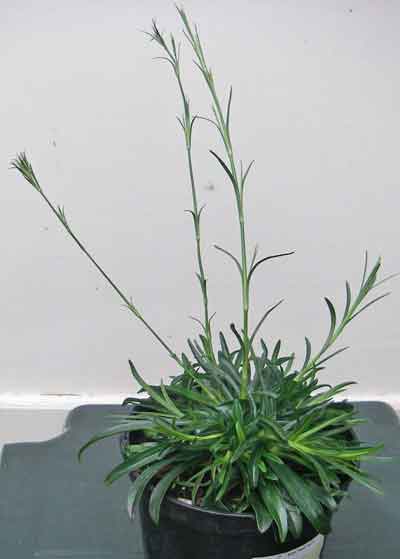 The "biennial" plant plant is supposed to take two years to flower, growing a low level rosette of leaves in the first year and then the flowering shoots in the second year. This particular plant has grown rather well and got ahead of itself and look as though it might flower in the next few weeks, before the winter weather really comes on. We will see.

Here is the plant in November 2011, just under one year old. 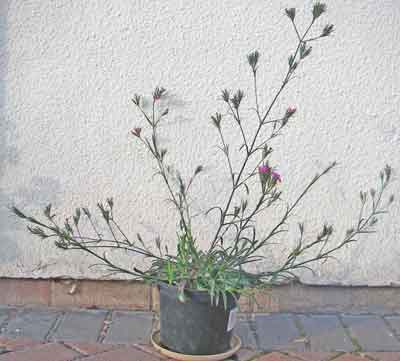 It has a total of 28 pink flowers on 30th November 2011. The flowers seem to last several weeks in this cooler weather. Just the occasional night with light frost. 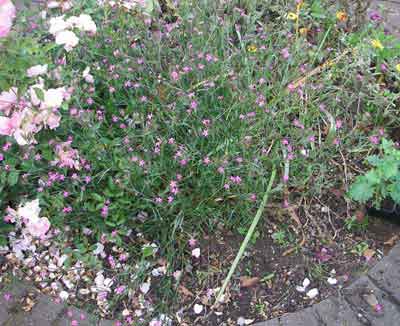 There were approx 300 flowers at the peak.  Now past its flowering peak at July 2012.  Died 20 August 2012.
Entire plant put in polythene refuse sack and shaken to collect the seeds.