Updated Jan 2021.  It has been a long time coming and I had my doubts at times that we would ever get here, what with getting Covid and whatever. Anyway, I was given a Wheat Grinder as Christmas present, which cost about £15 - £25 on Amazon.  See image below: 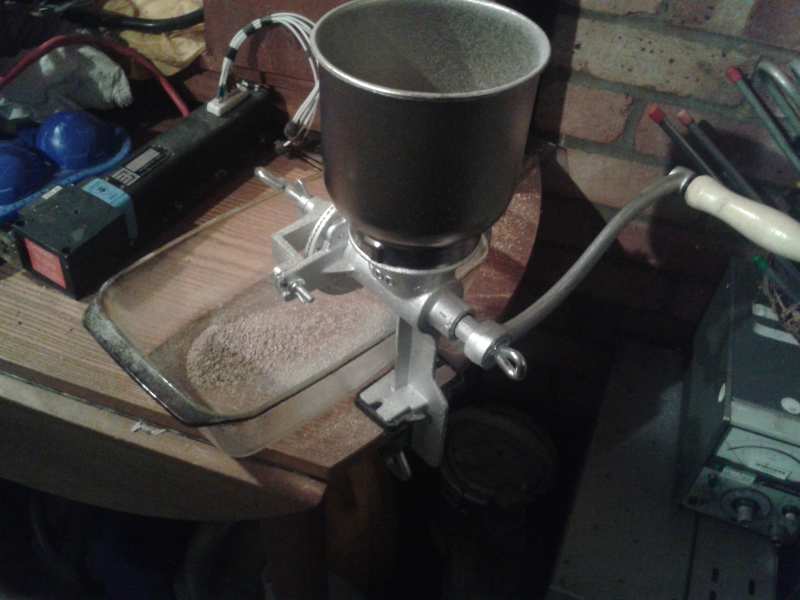 I set the wheat grinder up in the garage where there is a table with a thin top so that the clamp will fit round the edge and got down to grinding. You put the seeds in the hopper and out came partially ground seeds between two disks. (Note the black high power travelling wave tube from EEV and microwave power meter, lower right.)

We looked on the internet and read Merry Berry cook-book about baking fancy bread. The internet was more helpful.

We used 8 ounces of the wheat seeds, which an expert friend had pronounced as fit for human consumption. It took about 10 times through the grinder to get the flour so it looked fine enough and it was quite hard work.  We then put it in a big warmed glass bowl and added 1.5 teaspoons of dried yeast, 1 teaspoon of salt and 2 teaspoons of sugar. Not sure if the sugar is needed but maybe it turns into CO2 gas when the yeast get to it. Then we mixed it up thoroughly while dry and then added warm water till it was sticky like you do with concrete.  Kneeded it a bit and squeezed it down to a lump and put on top of the central heating boiler for 30min. It really did bigger as the instructions suggested and we then squashed it down, a bit more kneeding to make it stay stuck together and then put out on baking sheet, divided to make two rolls. We put into a warm oven for 30 min and it made little difference. It was supposed to rise a bit. Then 5 min at Gas 7 followed by 20 minutes at Gas 5. 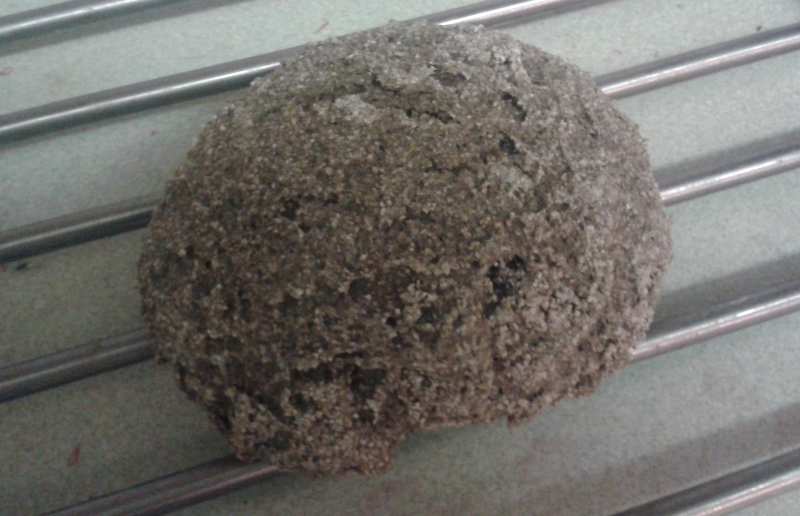 Results were as shown above. Only one roll is shown as we ate the first immediately with soup. It was really good.  I photographed it and carried on and ate half the second roll with butter and jam as it was very tempting.

I was going away for a week commencing 12th July 2020, and since a number of seed heads had lost their seeds I was worried that this would happen to all in the next week as it was warm dry weather. This was despite some shoots still having a green tinge. Anyway I decided to cut the stalks complete with heads and hung them all up in the greenhouse to ripen/dry.

From 20th July till 24th August I spent time cutting the heads off and crushing the chaff off. I found that wind was a good way of separating the wheat from the chaff. The biggest problem was the large number of very small seeds that were reluctant to separate.

Seed quality: I heard on the news that seed quality was low this year. Most of my seeds that look reasonable have quite varied shapes and sizes but there are many very small seeds and very few even grey/black. 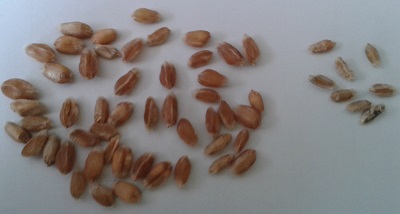 I guess that the quality is low.  You almost need a magnifying glass to see the smallest wheat seeds. The seeds I stated off with were all much the same size as each other and bright pink.

Friends asked about the yield per hectare and I laughed! I was more interested to see if we had enough to make one loaf of brown bread. Anyway I have measured the weight of the wheat grains, which came to 6 pounds 11 ounces. Or 3033 grams or 3.033kg. The area used to grow them was 6.04 sqm. 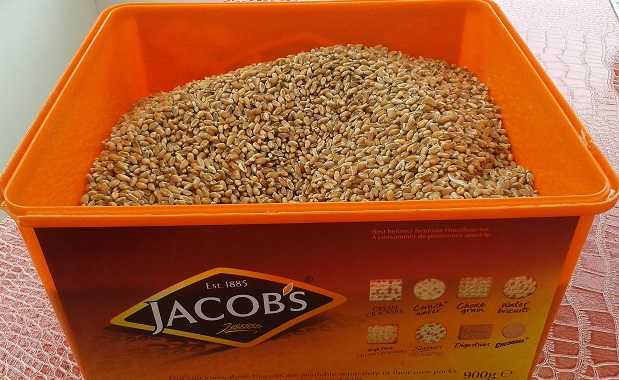 For reference Tesco are selling cheapest flour at 53p per kg, more typically ?1 - ?2 per kg for fancy named types)

Well short of enough to justify investment in a combine harvester!

I don't think there is enough  to take the seeds to the Woodbridge Tide Mill to get them turned into flour.

I am a bit concerned right now.  Several plants alongside a low wall are loosing their seeds. Not sure why, so any advice appreciated. I wonder if it might be pigeons on the wall being able to peck across at seed head height ? The remaining plants are all turning from green to grey/yellow. I hope it means that are ripening but not too sure. 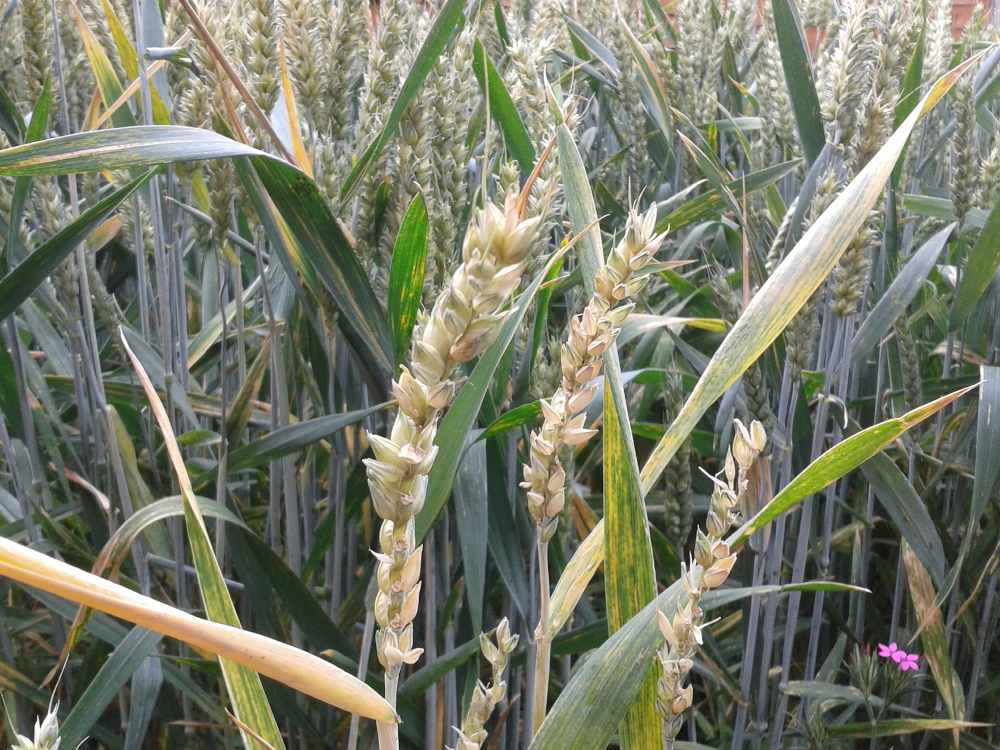 Some of the wheat heads with seeds disappearing - 1st July 2020 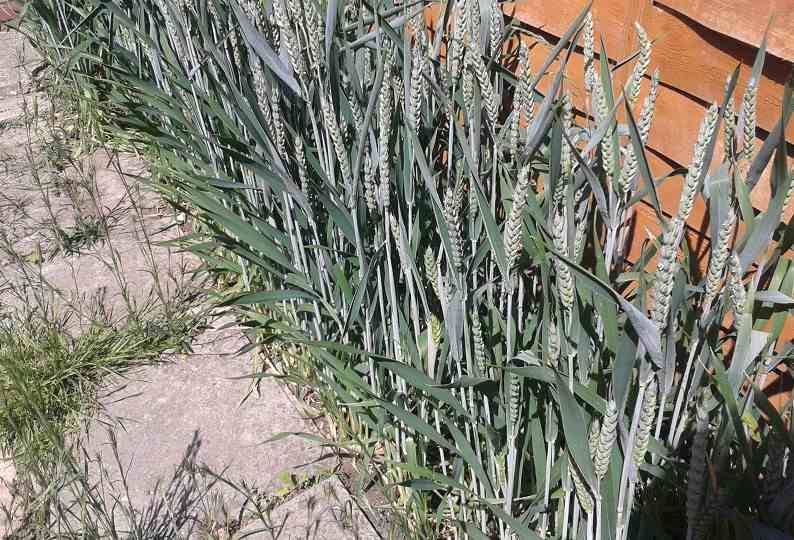 Winter wheat 1st June 2020. The weeds in the cracks in the paving to the left are Deptford pinks, not yet flowering.

It is now a couple of weeks since the first seed head was visible and most shoots have now opened up and the seed heads have moved up.. Average plant height has not increased much, now averaging 80cm.  It is difficult to count the number of plants per square m due to congestion.  I estimate about 113 plants per sq m.   The number of tall shoots with visible seed heads is about 350 per sq m. The count was difficult as there are additional shorter shoots which were not counted. 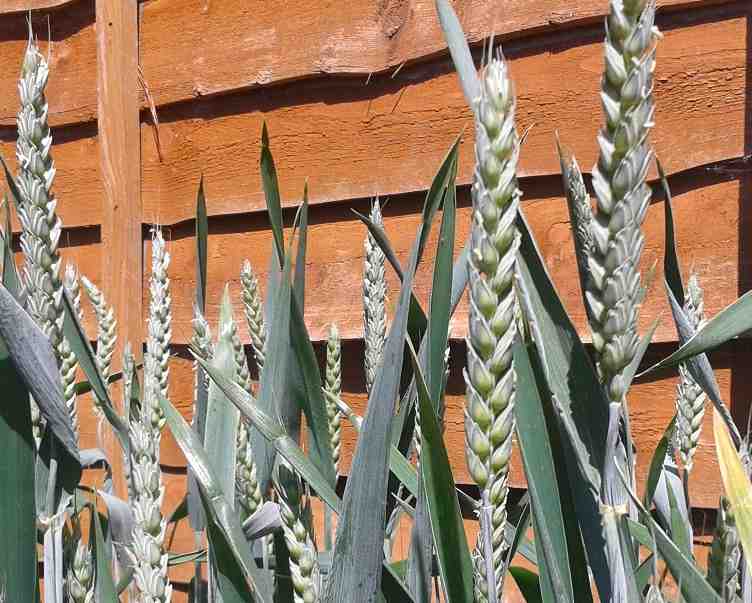 This what the winter wheat seed heads look like.

There are about 10 seeds per column. Not sure if there are 3 or 4 columns per seed head.

The plants now average about 70 cm high, although there are some smaller ones that were not sown at the right time.  Some, in another bed which was waterlogged at times and gets little sun, are definitely slow and weedy yellow looking.

The first green unripe seeds started to show today, as per this picture below. 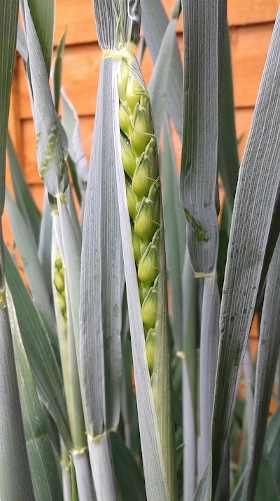 There have been no flowers that I could see but this morning (17th May 2020)  there are a couple of plants where thickenings in the largest shoots are swelling up and breaking open to reveal a vertical lines of 6 or 7 seeds. Going by last year, the seed head may have 3 or 4 rows of seeds..

During this corona virus lockdown period I checked up on the wheat plants growing in my vegetable patch to make sure they were doing well.

Some plants in pots had gone a bit yellow/brown on the lower site shoots and I fixed that with some nitrogen and phosphorus fertiliser. All nice and green new higher shoots now. The ones in the vegetable patch have not needed any fertilizer, but did need weeding over winter.

Anyway back to my Galleywood vegetable patch. This picture below is a section 45 cm wide along by a fence facing east, so it gets the sun from about 11am onwards. 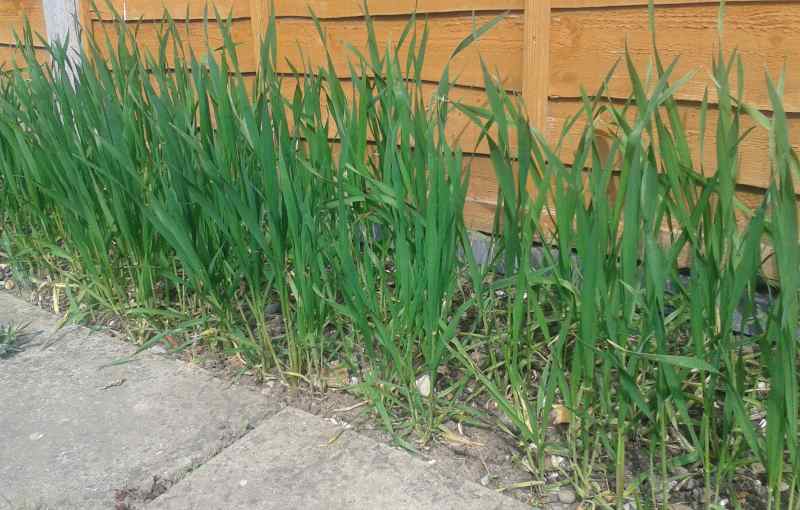 Here is the progress, as measured today.

Plants per square m.  The germination rate was near 80% and the result was: 106 plants per square m. Where there were gaps I put in extra plants grown indoors, but these did not do well at all. So next time put in plenty of seeds and do it before it gets too cold and wet. None of the seeds put in later in October came up.

I later read a DEFRA guide on optimum winter wheat population which said:

Shoots.  In addition to the first shoot, side shoots, called tillers, emerge. Some site shoots are about as strong as the main shoot, but many are weaker and shorter.  My total number of shoots per square m is 336.  Some of the side shoots are quite small and weak.  Some plants only have their main shoot. The best plant had 8 shoots total. My average was 3.17 shoots per plant. This compares poorly with the DEFRA suggestion that by mid April there should be between 5 and 16 shoots per plant, depending on densities of 320 to 40 seeds per sq m.  9 shoots per plant is normally expected at 80 seeds per sq m.

There has been no frost, so there is also a possible problem as I have heard that a frost is needed for the plants to make seeds. So, it is possible there will be no seeds but I am optimistic I will get some. I will have to wait and see.

Eddy gave me a small pot of pink seeds in Sept 2019 and I put them in about 2cm deep, three rows 15cm apart and seeds spaced about 5cm apart . Very approximate distances. Approx sowing: 133 per sq m.   Note I washed my hands carefully afterwards as the pink colour is some kind of virus/insect/bug/bacteria/mould repellent for whatever might trouble the seeds. I don't know what variety the seeds are, as the label on the pot is cryptic. It could be "TnDVN", "TnDYN" or if you look at it the other way up "NADUR".  The glass jar and lid label looks like this below: 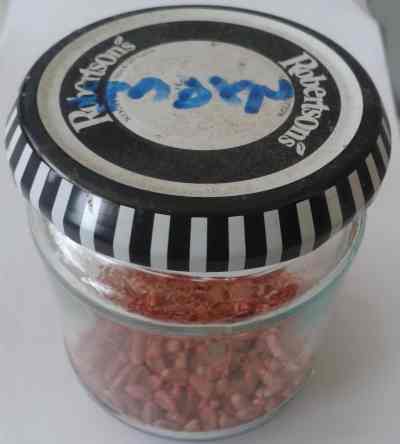 You have your guess as to what the blue felt tip writing means. I really would like to know exactly what I have planted.

Last year (2019) I grew just one plant in a pot. It just happened to grow there by mistake. Maybe the seed came from the bird feeder which was nearby?.  The plant had three shoots and three wheat seed heads. I cut them off and crushed them down gently till just the seeds were left. Then hammered the seeds until they were white powder and bran flakes.

Mixed all the result with a few drops of water and speck of bicarbonate. Squeezed into 1.5cm x 1cm x 8mm cuboid and put in the oven for 10 minutes. Result a 1 cu cm wholemeal brown loaf shared with the 6 children and 3 adults. Very tasty.  Hope for more this year (2020). I've added a simultaneous picture of a spoon handle to the above image of the smallest loaf, so you can get a better idea of the diminutive size.