We booked a week's holiday with Thomson, arriving 20th May 2013, and staying about 3km west of the harbour at Funchal, Madeira.  Flight arrival and coach transfer to the hotel were straightforward.

Under the hotel was a shopping mall where you could by newspapers, coffee, souvenirs etc. and the offices of Madeira Explorers, with whom we booked three half day levada walks. We visited their web site prior to coming and booked walks for the days we wanted. There was no need to pay in advance. You simply pay the guide on the day, 23 euro per person.

Our first walk was at called "Paradise Valley".  Tuesday morning.  They picked us up outside the lobby at 9am in a mini-bus and then proceeded to several other hotels, picking up a total of about 12 guests. Then off to the start of the walk, about 20 minutes.  The starting height was 800m. The walk was 5.5km and slope approx 1:200, so virtually on the level and it was only by looking at the direction of flow of the water in the levada was it possible to detect if you were going uphill or downhill. The weather was partly cloudy and cool. Ideal for walking today.  The name of the levada was Serra do Faial.  We started in Vale do Paraiso, walked past the scattered houses that make up the village of Camacha and ended in Rochao.

The levadas supply water and you buy, for example, one hour per fortnight, when the water gate, approx 10x10 cm, into your terraces is opened by the water manager. 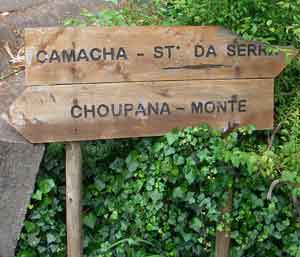 Start of the walk. Leap out the minibus and onto the trail into the forest alongside the levada called "Serra do Faial". 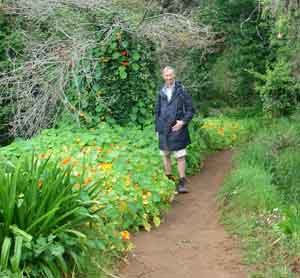 A cool morning with a breeze and considering the altitude, the reason why I have my kagoule on! 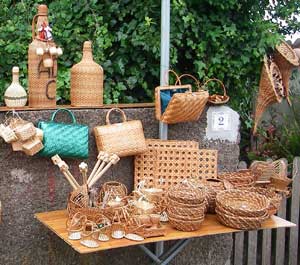 Some interesting basketwork for sale. 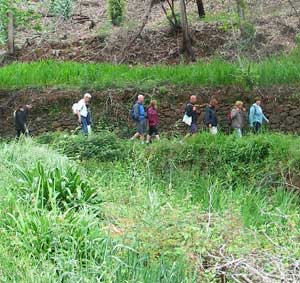 If you rush ahead ahead, being careful where you step, you can get to take picture of those coming behind. 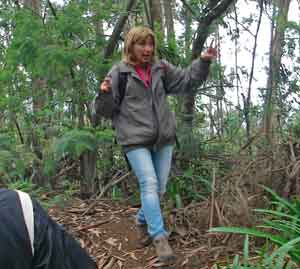 Our talkative and informative guide. 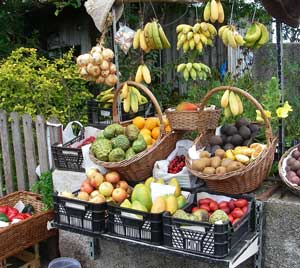 Normal bananas were very good but something similar (top right in image) turned out to be like pomegranate inside. 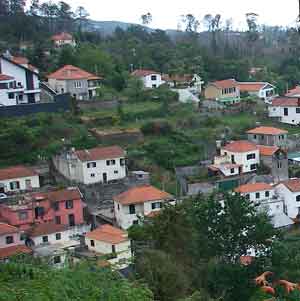 View down into the "Paradise valley" with many cultivated terraces, irrigated by intermittent supplies of water from the levadas. 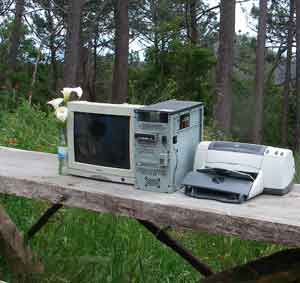 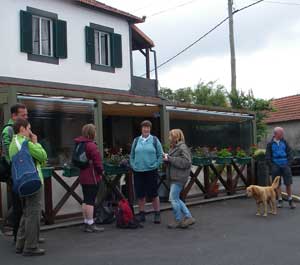 Welcome rest at the end of the walk.

The second walk was on Thursday morning. As before, the pick up went well, collecting us just after 9am. The drop off point was on a road overlooking the Referta valley with views over the north coast.  We went down some steps and joined the levada, just where it came out of a tunnel.  During the most of the walk we could look back towards the starting point.  In the second picture below the levada is an invisible horizontal line across the entire image, hidden in the vegetation, but level all the way.  5.5km flat and easy. 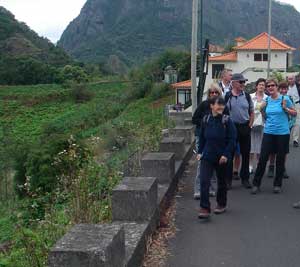 Start of Referta/Castelejo walk. A few steps down on the left to the levada. 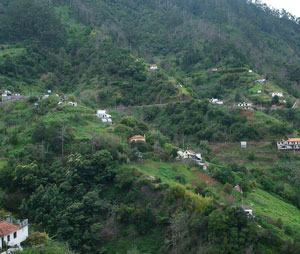 We walked from left to right across this view, all on the level, following the contour of the levada. 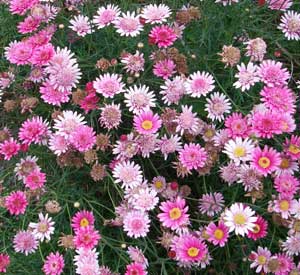 Example of the many flowers alongside the path. 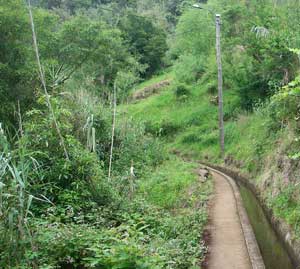 View of path alongside the levada.  Note the lush vegetation and light of people walking home at night. 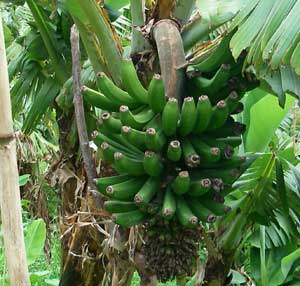 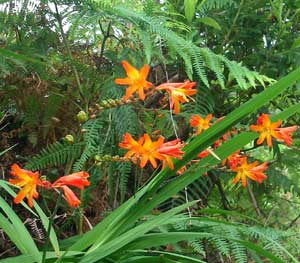 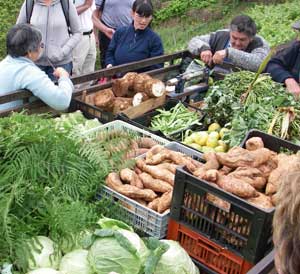 Produce for sale, cultivated on the local terraces. 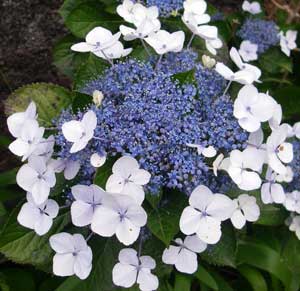 Unusual contrast of white and blue. 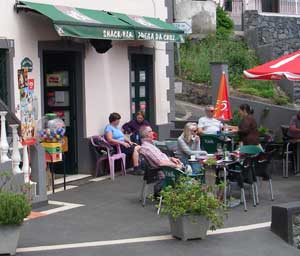 Cafe with coffee and cake to end the walk.

This walk was to the west of Funchal, with views to the south over the sea. The Serra de Agua water channel had come a long way from the west and north end of the island of Madeira. The water is used for hydroelectric power and eventually for water irrigation of the crops.  The water is no longer used for drinking.  Our guide, Alvero, hurried us along the first section so that we should arrive opposite the church below to hear the church bells chiming, which I managed to record.  Listening directly to the sound there was a double echo, which is not too obvious in the recording.  Views over Encumeada and Campanario.  5.5km flat and easy walk. 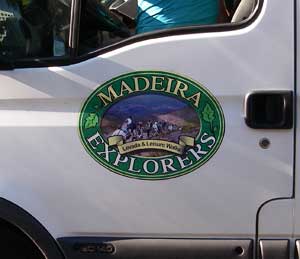 Well done the Madeira Explorers with their mini-buses and guides. 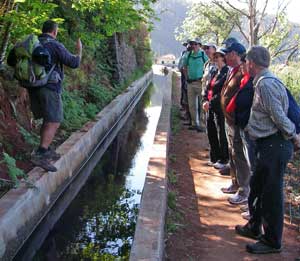 Explanation of how levadas work. 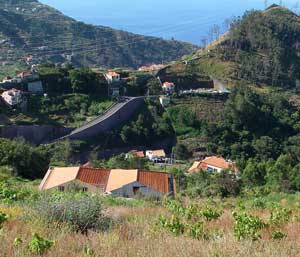 View down and out over the Atlantic. Listen to the church bells 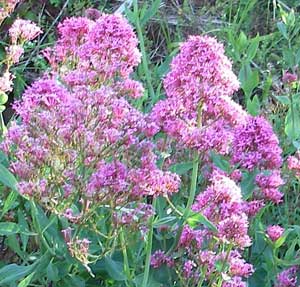 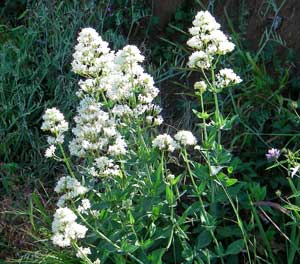 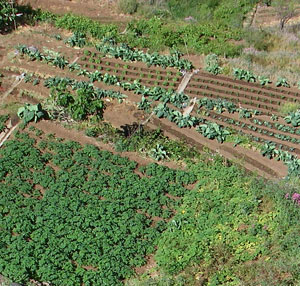 Vegetables being cultivated on the valley floor. 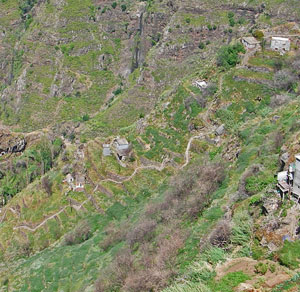 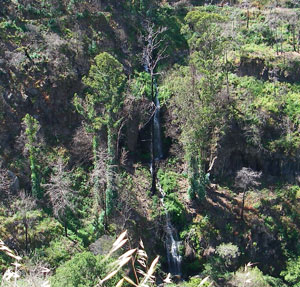 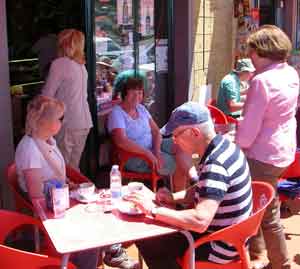 On Friday we took the chance to go out on a large catamaran sailing boat, which was advertised widely on the island with leaflets in every information office.

We chose the one called "Sea Pleasure" as we thought it would be the fastest boat. We had an excellent morning out. The weather was fine, the winds light and we saw many dolphins.  Initially we saw just 2 or 3 and later on there must have been about 20, with 8 jumping together while another dozen circled the boat. 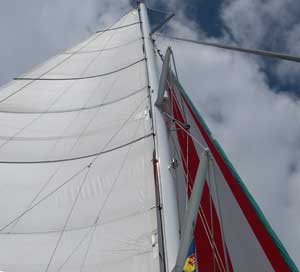 Three of about twenty dolphins seen off Funchal.