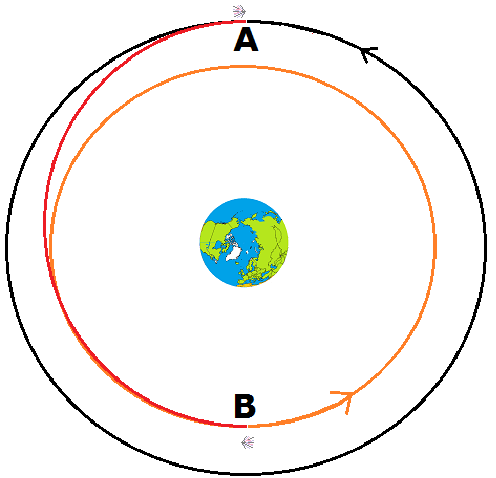 The figure above shows the geostationary orbit as the outer black circle. The satellites are travelling eastwards at 3075 m/sec, to keep up with the earth's rotation below.

When it is required to initiate a orbit repositioning to a further east longitude orbit position, there is a need to advance the position gradually in easterly direction for a while, typically over a few weeks till the new position is reached.

The method described here starts to lower the orbit of a satellite over the Pacific, so that the satellite goes round the earth faster for a while, then the orbit is raised up again when the new orbit longitude is reached. Putting it in a temporary lower circular orbit avoids any risk of collision.

Start by slowing down the satellite at the starting position A. It will now start to drop down, into an elliptical orbit, and if allowed to do so will come back up again to the same height, almost a day later. The period of this elliptical orbit will be slightly less than before so the satellite will now start drifting east, slowly, while varying in height every day.

Rather than leaving it in an elliptical orbit, wait half a day and slow it down yet more, at B, so that it is now in a circular orbit at lower height, as indicated by the orange line. Here it is safe from collisions and will be going round the earth in less than a whole day, so it will appear to  advance its easterly longitude position as each day passes. You may have to wait several weeks. The more fuel you use the lower the temporary orbit and the faster the drift rate. 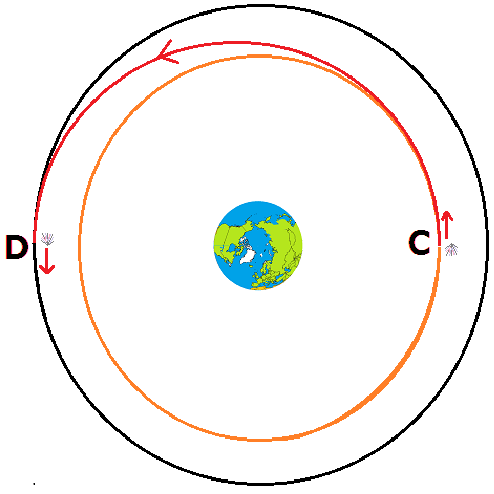 I'm assuming you want to move a satellite, initially over the pacific, by 90 deg further east in longitude, so it is over the Americas (position D). Long= 270E or 90W. While in the lower, faster orbit, wait while it drifts until it arrives at the desired destination longitude.

Now boost the speed up so that half a day later, the satellite will be higher up (at its apogee) at the geostationary height (35786km) and at the wanted orbit longitude position.  Once it is at the top, boost the speed up further so that the orbit becomes circularised. The black geo orbit has a slower rotational orbit period than the orange orbit.

The above is an educational simplification and the height difference in the figures is greatly exaggerated.

The amount of these thruster firings needs to be sufficient to make the required change in speed, called "delta V". For example, two burns of 3.5 m/s are associated with a height change of 186 km and a 2.4 deg per day drift rate.*

If there is a need to move a satellite westwards, the above procedure is modified to raise it temporarily to a higher orbit, so it gradually goes backwards in longitude, for a while.

The earth does not have an even gravitational field and satellites, without any thrusting, drift east or west along the orbit of their own accord. This natural drift may or may not help you with geo repositioning.  There are two positions along the orbit where satellite drift away from at 165.3°E and 14.7°W and to positions where to where they are attracted at 75.3°E and 252°E.

In addition to sideways drift there are much bigger orbit influences such as the pull of the moon and sun which cause the inclination of satellite to increase. Inclination causes daily north-south movement.

Old redundant and obsolete satellites are ideally put into a higher circular orbit above geostationary at end of life to minimise collision risk. Typically 250km or more.  The feasibility of this depends on there being sufficient residual fuel to complete the task...