In 11 Aug 2006:  Patriot Antennas, the N. America antenna manufacturer based in Albion, Michigan, announced a new a transportable flyaway version of their unusual offset segmented antenna. 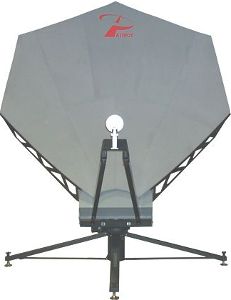 Its dual skin technology means that high profile accuracy is maintained and operation from C band through Ku, X and Ka band frequencies is possible.

The larger size make it suitable for regular C band VSAT applications as well as for applications where there is a significant transmit eirp requirement, as transmitter (BUC or HPA) powers may be kept moderate by using the extra transmit gain of the larger dish.  It is ideal for satellite TV broadcast, military or similar satellite application.

The antenna is lightweight and rugged and may be set up in 20 minutes or so.  The antenna comes in seven packing cases for safe and efficient transport.  Total weight is 741.5 lbs.

The history of this company since 2006 is complicated.

Patriot was acquired by Cobham Military & Defence company in 2007. Cobham closed the Patriot production facilities in 2010. On 31 Dec 2011 I wrote: Patriot Antennas was formed in 1992 and manufactured antennas for both civil and military applications. Up to 120 people were employed. In 2007 the company was taken over by Cobham.  By late 2011 the number of staff was down to 31 and the site was closed 31st Dec 2011 with the remaining work transferred to Cobham's facility in Orlando, Florida.

A company called Cpii (Communication and Power Industries) now appears to make similar fly away antennas in a range of sizes fro 0.6m to 2.4m. These antennas have a different reflector construction.

This document includes transmit and receive gain figures, cross-polarisation isolation figures, both on-axis and on the -1 dB contour plus packing crate dimensions etc. 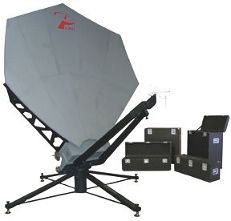 The images above are published with the kind permission of Patriot Antenna Systems,  704 North Clark Street, Albion, MI, 49224, USA  and the text was derived from their email press release dated 11 Aug 2006. Note the update information above regarding closure of the company and its new ownership(s).