There are two transponders: 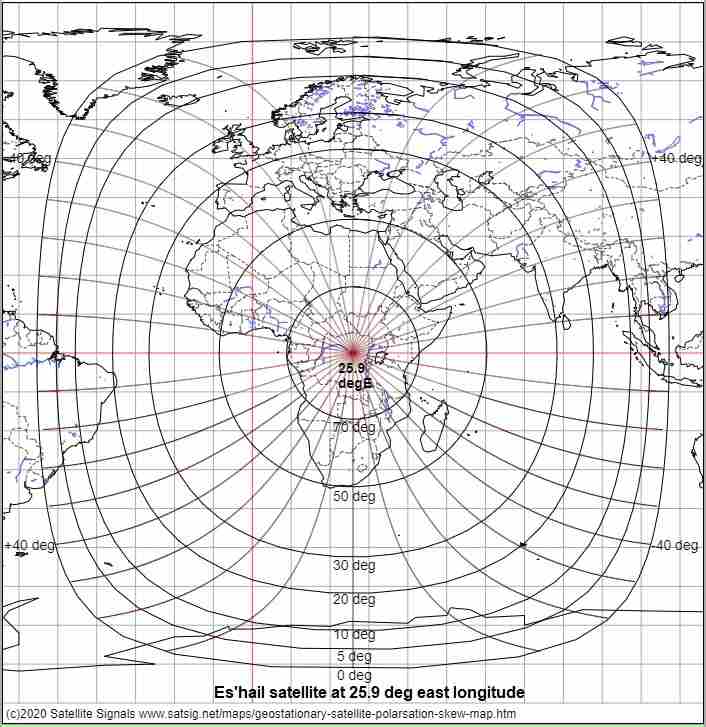 The global beam antennas on the satellite produce a circular beam approx 17 deg diameter which is aimed the equator on the earth directly below the satellite. Signals levels at the sub-satellite point will be about 3 to 4 dB higher than at the earth's edge, when the elevation angle is zero and the satellite hardly visible.  The map above shows the calculated 0 deg elevation line assuming the radio signals travel in straight line. This is not true for low elevation slant paths as the air density is higher lower down and this refracts the signals downwards. The amount of bending depends on air density, temperature and water vapour and this varies. Severe scintillation, like the twinkling of a start, occurs and your measured level may vary many dB, both up and down.  At times it expected that signals will be receivable intermittently well beyond the straight line horizon !

Beacons in the Narrow Band transponder

These beacons are generated by earth stations and transponded via the satellite using a satellite based 8089.5 MHz local oscillator, so take this into account if measuring exact frequencies.

There are two downlink linear polarisation names, Vertical and Horizontal. These are "nominal" polarisations and are aligned relative to the equator, at the satellite.

The angle of your received polarisation, relative to your local ground horizon,  as it arrives at your location will depend on your location.

Elsewhere you need to tilt your receive feed system. The amount of tilt required, in the range +/-90 deg, is called the polarisation adjustment amount or skew angle. The map shows skew angles at 10 deg intervals, with the +/-40 deg lines marked.

Start by setting your nominal polarisation, then apply the adjustment amount.  Positive amounts refer to a clockwise adjustment, with you standing behind the antenna and facing forwards towards the satellite. Note that some Ku band LNBs may have polarisation scales on the feed throat. These scales have useful tick marks at say 10, 15, 30 deg intervals.  Any numbers on the scales may need to be disregarded depending on  which direction they go.  e.g. 0 to - 360, -180 to +180 deg, -90 to +90 deg.

All that matters is that you set the initial nominal polarisation and then apply the required adjustment amount.

To peak up the polarisation, turn the feed till you have significant degradation, mark the angle and measure the degradation accurately and then find the same degree of degradation the other side. Then halve the angle between the two positions.

You may receive the Narrowband transponder here: https://eshail.batc.org.uk/nb/

If you can help verify I have calculated the elevation and skew lines correctly it would help. Any other comments to be add to this page appreciated, by email to me please: eric@satsig.net

Copyright notice: As of GSHHG 2.2.2, GSHHG is distributed under the GNU Lesser General Public License (LGPL) version 3 or later. Copies of the The GNU General Public License (GPL) and the GNU Lesser General Public License (LGPL) are distributed along with the sources. Permission to use, copy, modify, and distribute (with no more than a reasonable redistribution fee) this data and its documentation for any purpose is hereby granted, provided that the above copyright notice appear in all copies, that both that copyright notice and this permission notice appear in supporting documentation, and that the name of GSHHG not be used in advertising or publicity pertaining to distribution of the software without specific, written prior permission. The University of Hawaii (UH) and the National Oceanic and Atmospheric Administration (NOAA) make no representations about the suitability of this software for any purpose. It is provided "as is" without expressed or implied warranty. It is provided with no support and without obligation on the part of UH or NOAA, to assist in its use, correction, modification, or enhancement.

The information must not be used for navigational purposes except by Capt Kirk of the Starship Enterprise.