Clipper 60 sailing on the Solent

Today I went on a sailing trip into the Solent from Gosport. I had won a runners-up prize in a newspaper competition to go on a round the world Clipper sailing boat race. About 2000 people applied and the top 5 each won tickets for a 19 day modular training course, after which one person would get a chance for the real race.  I was one of the remaining runners up. 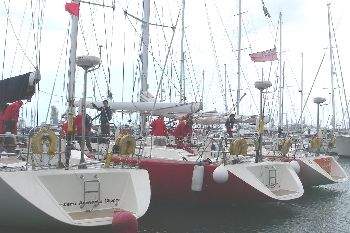 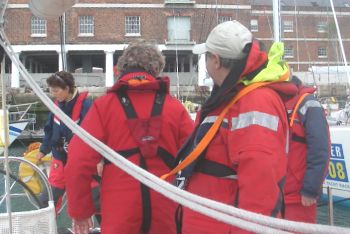 Kitted out in wet weather clothing and safety harnesses


I set off early from home at 5am since I had to negotiate the M25 round London before driving down to the south coast to Gosport, which is opposite to the Isle of Wight in the English channel. I found the Clipper Ventures office at 9:45 with no problem where I was made welcome and introduced to the other crew for the day.

Round the world sailing race

One of the staff told us about the multi stage sailing race, due to start in Liverpool in September and how the boats were sponsored by various cities around the world and how the crews were made up of a high proportion of beginners with, initially, little or no previous experience of sailing. 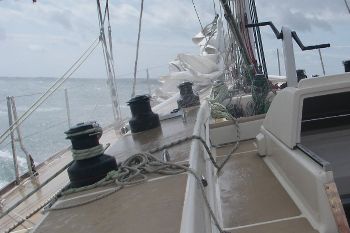 Just before raising the front of the two possible headsails 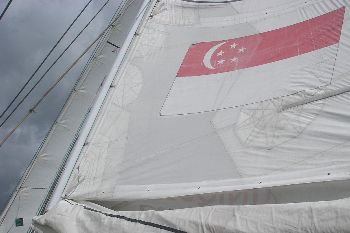 Singapore main sail with two reefs at the bottom.

The group of eight of us today were typical; some had never been on a boat, others had limited experience and a couple had been on a bigger boat before. 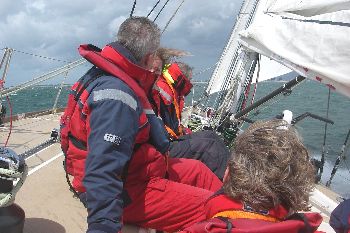 Sailing to windward on port tack, wind from the left. 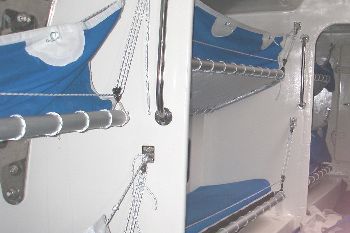 Sleeping bunks - comfortable and long enough for me.


We walked along the quay to where the boats were moored up. Ours was one of the ten identical boats, each 68 ft long and with accommodation for up to 18 - 20 people. We met up with the captain and his two helpers, called first mates. The captain was pleased with the weather today as was there was a decent wind blowing which made a change, as the past few weeks had been rather calm.  The departure gave us confidence, the captain told us what was the plan and how it would be done and when the four big black ropes attaching us to the adjacent boat were released in sequence and it all worked like a well practiced routine we were quite impressed. We motored out for about 300 yards and turned round into wind to put up the big main sail.  Because the wind was quite strong the lower part of the sail was kept folded down in two reefs making the whole thing smaller than normal.   The captain radioed the harbour control, telling them the plan and where we were going and warning other boats, such as the Isle of Wight and Gosport ferries that a large sailing vessel was on the move.

We turned side on to the wind and started sailing for real.  The water was calm inside the harbour area and one of us was allowed to steer, aiming cautiously for the gap that led out to the Solent.   Using just the reefed mainsail, the speed was about 3 - 5 knots. 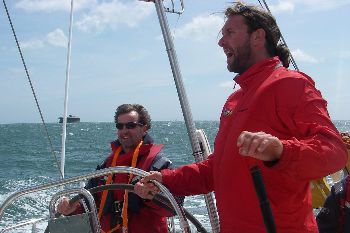 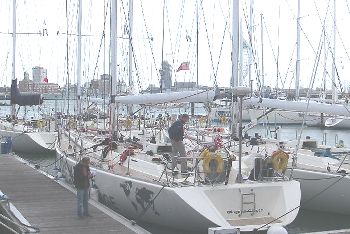 Ten Clipper yachts - one big round the world sailing race


Once we were outside the harbour and clear of any buoys, ferries or other solid objects we slowed for a little and the front jib headsail was pulled up. This jib sail was triangular and had a big rope at the bottom back corner which needed pulling back hard; a winch was used to do this. The rope was put round the winch four times and then at the top of the winch the rope was pulled between two disks with a V shaped slot so that it stuck on its own.  The using a pair of handles, called a grinder, two people worked the handles and via some hidden gearbox made the winch slowly pull the rope till the sail was at the desired angle. The tension in this rope, as caused by the wind helps to pull the boat along. There was provision for a second headsail called a staysail, making three sails in total but we did not need that complication on this first trip.

We then steered south east past a line of red buoys, which indicated a sand bank to be avoided, and then onwards towards two old forts. We turned right and then did several tacks, working our way back into wind towards the west. Each time we tacked the big metal boom at the bottom of the main sail came over our heads so we had to crouch down. As the main sail went over, the front jib sail flapped, but was quickly pulled tight using the big jib sheet rope on the opposite side.  We got quite wet as the salty sea spray flew backwards across the deck.  The boat healed over significantly, about 22deg, but was quite stable and felt safe.  We moved across and climbed up on the high side each time we tacked, to try and keep her level.

Approaching the harbour on the return we got even wetter while lowering the jib which flapped about till it was sat upon by about six people.  The sea spray was no problem as we had been kitted out with really smart waterproof red trousers, jackets and safety harnesses/life jackets.  We clipped on our safety straps, as appropriate, to long tapes running along the deck.  I was wearing a pair of jeans, trainers and a couple of wool jerseys and was plenty warm enough and dry underneath. 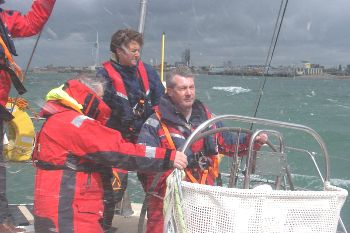 Everyone had a go at all the different jobs and the captain and his two mates explained everything.  It was not always easy to hear with the wind blowing but they were very patient with us. The most problematic jobs seem to be those associated with handling the heavy sails; we had problems simply folding the main sail neatly down onto the top of  boom and gusts of wind catching the loose jib on the deck was also a concern.  Trying to put up or rearrange sails in gale conditions will need a lot of coordinated team strength.   Each team needs some strong people to make up for us oldies.

Arriving back in the dock we put out balloon like fenders and prepared the four mooring ropes ready for the arrival - which was uneventful, up against one of the other Clipper yachts.  A nice surprise was lunch packs which we eat on deck in the sunshine which had come out to welcome us back.  Everyone agreed that it has been a great success and thanked the organisers.  Well done captain !

During the world sailing race, each boat has an experienced captain and there are 17 further people on board who are divided up into two or three teams called watches.  Each watch has a leader, who is one of the more experienced guests, and the watches take it in turns to race the boat while the others rest.  One person gets to look after the cooking and cleaning each day.  On each leg, one boat hosts a TV crew who record the activities.  Hopefully they also help a bit.

I took a chance to look round inside and tried out one of the bunks for size; it was plenty long enough for my 6ft 2in length and quite comfortable.  On some boats you are assigned to a particular bed.  On others you move around. I guess to help balance the boat.

Those doing the sailing have to keep the boat going fast, hopefully faster than any of the other boats and, in the long term, going in the right direction.   The routes are chosen for generally downwind sailing where everyone can contribute to the boat speed. Adjustments are made to the three sails to keep the airflow optimised.  I asked how they managed to race at night and was told they had lights to help see what the sails were doing. There was a relative wind direction instrument but I think it is going to take a lot of practice, and maybe a dim light pointed at the sails, to steer well at night. I had a few minutes at the helm steering wheel.  It was daytime and I could see the sails and the steering was not too difficult.  The steering was exactly neutral however, so it was tricky, pushing and pulling alternately to keep the sails exactly aligned with the wind.

It was all very interesting and I could have spent all day, and much more, learning.  I wonder if they have a handbook to study with optimum sail and rope positions for different wind strengths and directions.

To join the next 2009/10 Clipper sailing race you need to apply and be selected for the modular training courses comprising parts A, B and two times part C.  The training takes a total of 19 days, spread over four sessions.

You can apply for just one section of the race, called a leg, such as from Liverpool to Brazil or go for the whole round the world sailing race, depending on your budget and inclination.

Good luck, have fun and race to win - safely !