Start of the Rolex Fastnet race

The start was on Sunday 16 August at 1pm in the Solent, just of Cowes, Isle of Wight.  The wind was light, around 5.6 kts.  My virtual boat Class 40, called satsig.net, is using the standard basic set of two sails, spinnaker and jib.  Using the spinnaker for the first 6 hours till 7pm meant slow steady progress downwind, past the Needles and out into the English Channel. After 7pm I set course 245 deg with a wind angle of greater then 80 deg to try and keep the speed  up, using the spinnaker.  Around 11pm I changed course to 230 deg and changed the sail to jib, with wind angle under 75 deg.

Towards 6am the wind became very light around 3kts veering from the north west towards west and this slowed me down.  I was sailing too close to the wind and despite having turned to the left I was still too close, with a wind angle of 36 deg.  After an hour of this drifting speed, , at 7am, the wind changed direction and picked up to 7.7kt from the north east and it was possible to switch back to spinnaker and aim direct for a point just south of the Lizard, Cornwall. Times on the images are 1 hour ahead of my clock. 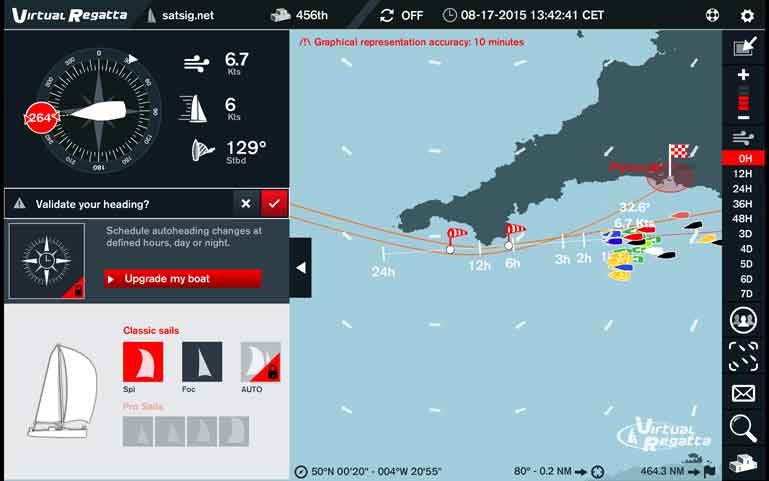 This image shows the situation after 24 hours sailing. Now south of Plymouth. I'm the red boat in 456th place, just below where it says 6.7kts, wind speed.  The flag next to the 6hr makers shows where I might be at 7pm this evening. The problem is that the wind in that area is 4.3kts from 50.5 deg. With a course now of 264 that leaves me with wind angle of 146.5 which is not the fast, even for the spinnaker.  I would be making much better progress with a smaller wind angle. I am thinking of turning right 10 deg and heading towards land to the east of the Lizard.  This should get a bit more speed on and hopefully put me in a fair position for a good close reach if the wind at 7pm changes into westerly, currently forecast at 283 deg, so I can go south west. 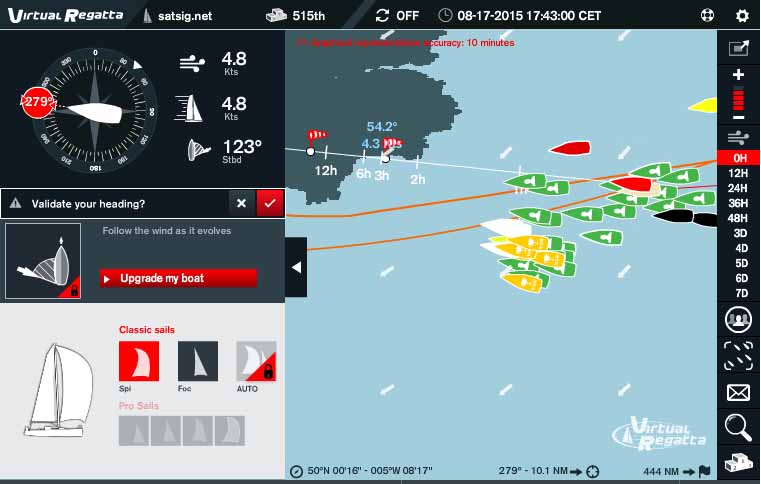 4:15pm I have dropped back some 100 places to 540th, so turned right by 15 deg from 264 to 279 to get from 4.1 to 4.9 knots, potentially ending up on the coast at Kennack Sands Holiday Park. Intention is to turn sharp left once the wind changes at 7pm and miss the Lizard to the south west - hopefully!. After half an hour of this course have regained 25 places to 515th. 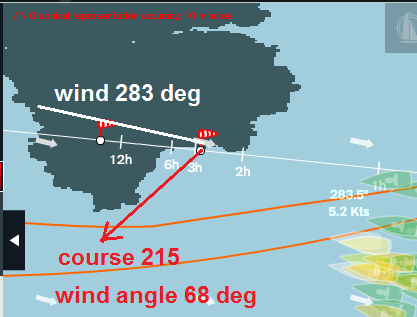 Here is my plan for 7pm.  The current wind forecast from the on at that place is 283 at 5kt.  My intended course , just clearing the Lizard is approx 215 deg, giving a wind angle of 68 deg, with is fine for the jib sail. Once clear of the coast I will harden up to 41 deg wind angle, for best windward speed (VMG). Any wind angle between 41 and 48 gives the same VMG, so I will allow variation in this range while keeping course unchanged as I think every course chance involves small time penalty. Not sure about that.

Turned south west and changed to jib sail, as planned. 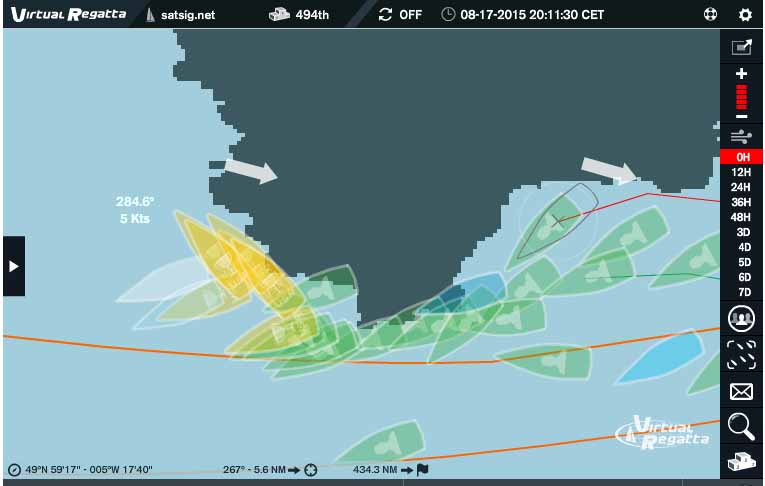 Lizard point is about 3.5 miles ahead on the right. With then start tacking upwind, keeping to the coast initially where the wind is stronger, about 5kt compared with 4.5kt further out. 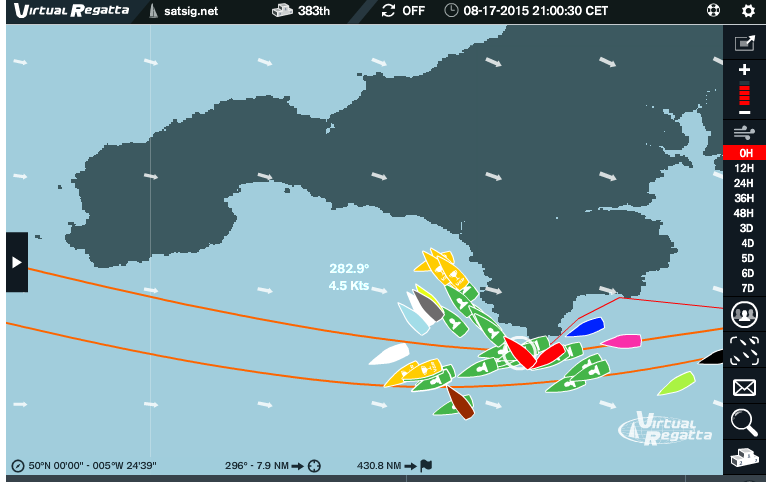 Its now 8pm Monday 17 August 2015.  Having rounded the Lizard, I'm now aiming on the north west tack at 42 deg wind angle and intending to tack where the leading yellow boats are located so as to pass through a peak wind area marked 282.9 deg 4.5kt I have gained places to 383rd, the best so far.

This is a sailboat 'polar', for 5kt wind speed, showing the boat speed at various wind angles. Comparison of two similar upwind sails.

I guess that many behind me with pro sails will gradually come past and overtake me. This diagram shows use of my basic jib (called Foc above) giving 4.12 kt compared with 4.32 for the Code 5 pro sail. Regarding VMG to windward you need to multiply by cos(42deg) which gives 3.06kt compared with 3.21kt, so there is an advantage of 0.15kt. After 12 hours tonight they will be 1.8 miles ahead. 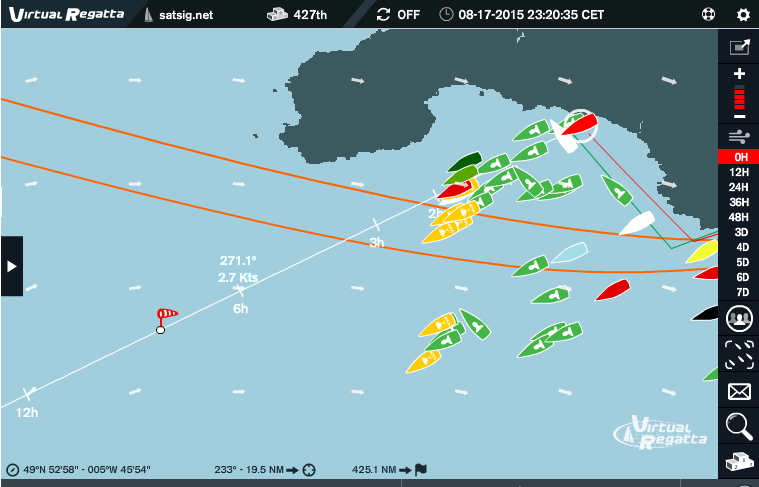 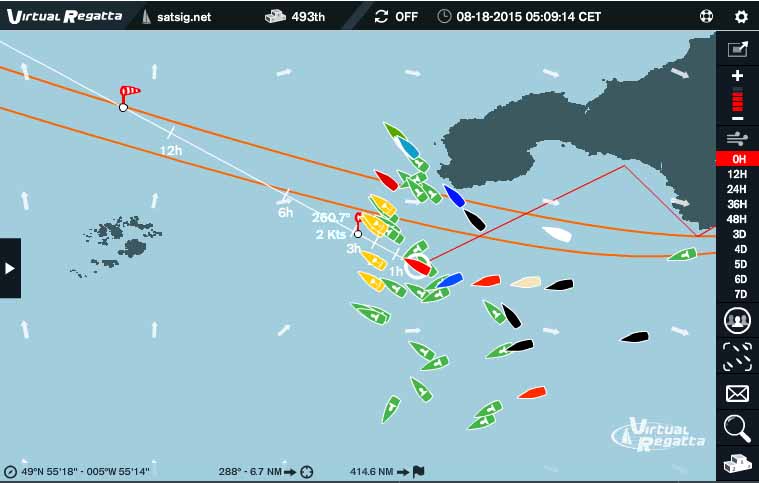 4am !! tacking to the right due to adverse headwind.  New tack actually now in the right direction for the Fastnet.

Other boats which I am watching closely are Aberlady, RCLaser27, RadiocontrolLaser 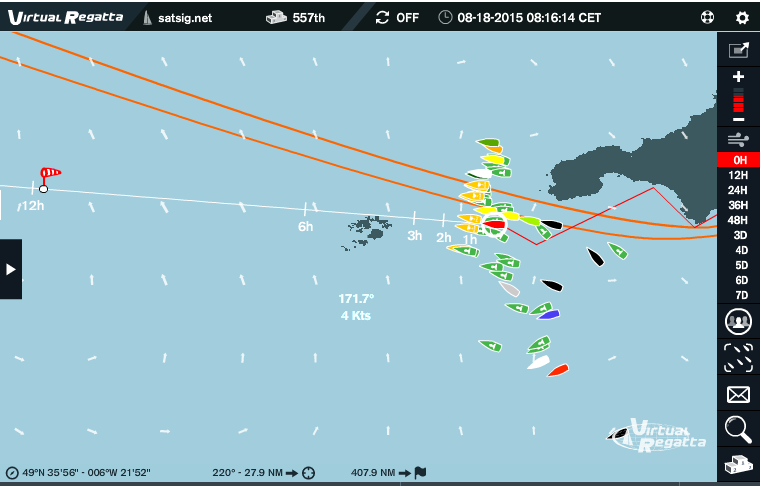 7:16 am I have just turned left to try and get more at right angles to the wind, looking to pass just north of the Scilly Isles. 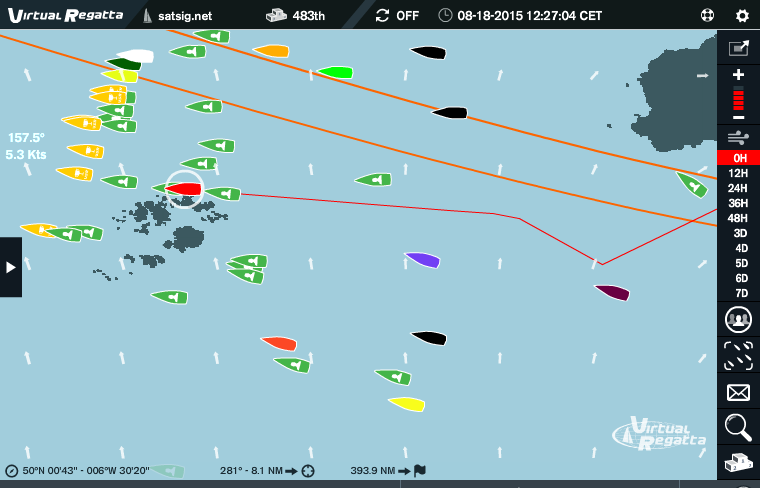 Passing the Scilly Isles.  Turned just a few deg to the left to remain along a line of peak wind area and to maximise distance to the west.  The forecast for stronger winds (about 10kt) this evening from 7m from the south west means a good sideways wind angle towards the Fastnet rock, the further west I start.  These boats sail best with the wind from the side. 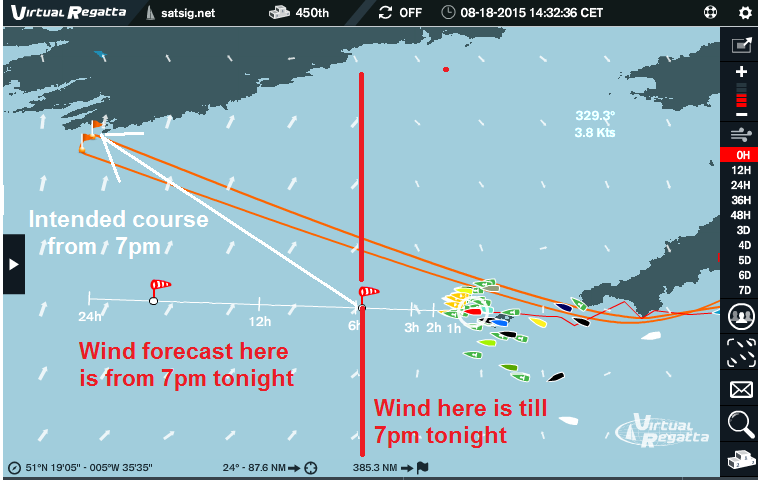 Afternoon strategy.  The right side of the picture shows the wind now. On the left of the picture is the wind forecast from 7pm tonight. I'm expecting to reach the big red line at 7pm tonight. Unless the forecast changes drastically, tonight should be nice beam reach to the Fastnet. Wind 9 to 13kt, with boat speed possibly up to 9 - 10kt on the white arrow course. 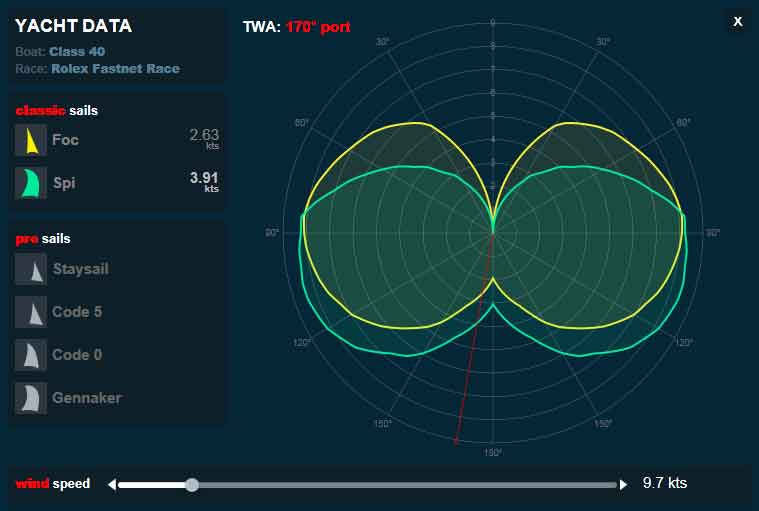 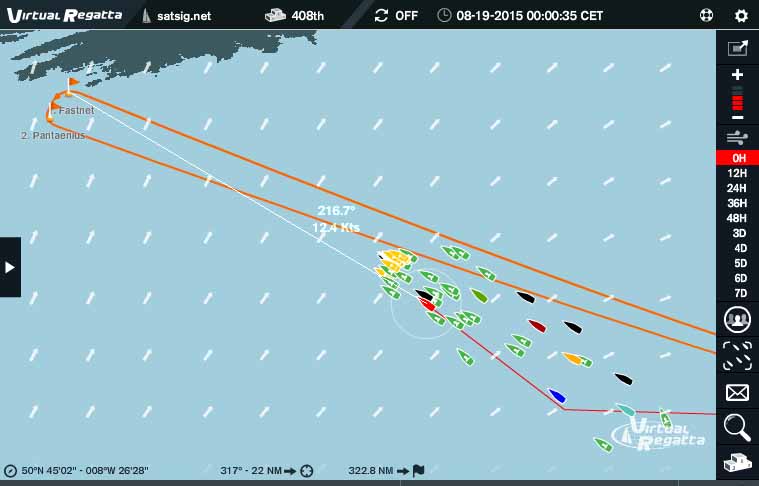 At 7pm turned north west as planned. Added a few deg to the right to avoid loss of speed with spinnaker all the way rather than using the jib for the first few miles, saving a sail change while I was out this evening and also any time penalty for changing sails. I'm trying to minimise any course changes, keeping to perhaps 1 change in the middle of each 12 hours, 7am to 7pm to 7am.

At 11pm turned slightly left to aim just right of Fastnet rock, see the white line.  Boat speed reduced from 9.6 to 9.4kt. Expect to reach the turning point at 7am tomorrow. 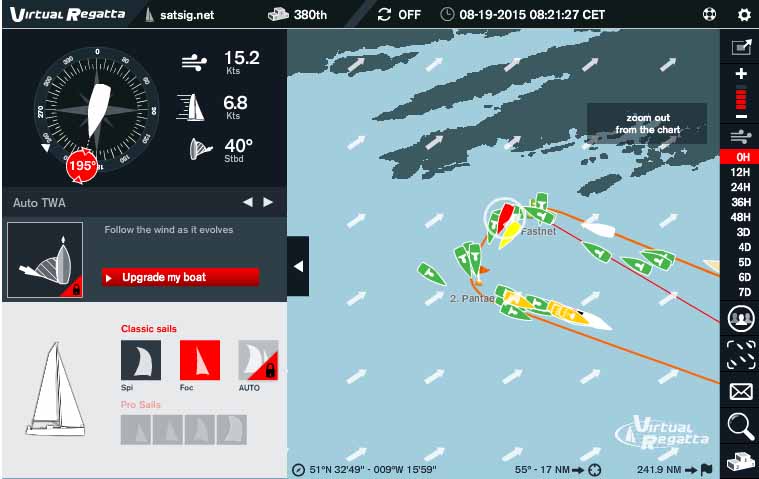 Tricky business round the Fastnet rock!  Due to boat movements being in 10 minute increments I overshot by about 0.5 mile. Not to worry I can make the next mark, Pantaenius buoy at 40 deg wind angle which is about the minimum viable angle. 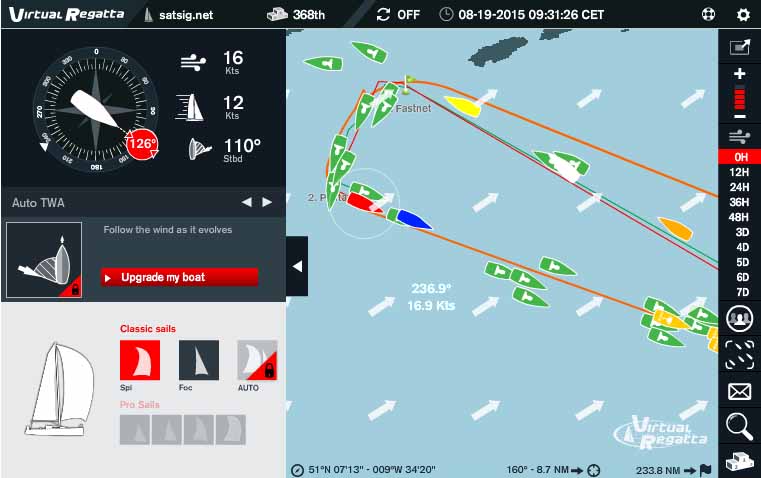 0831 The green boat close on my left (port side!) is RCLaser27. I'm hoping the slightly stronger wind to the right of the course will benefit me so I am sailing about 3 deg off course, 126 deg, but my distance will be greater. I will need to turn left later, say 2pm as the wind direction changes and I will respond to that, but it does not make much difference if you look at the polars. I'm not sure I am doing the right thing. 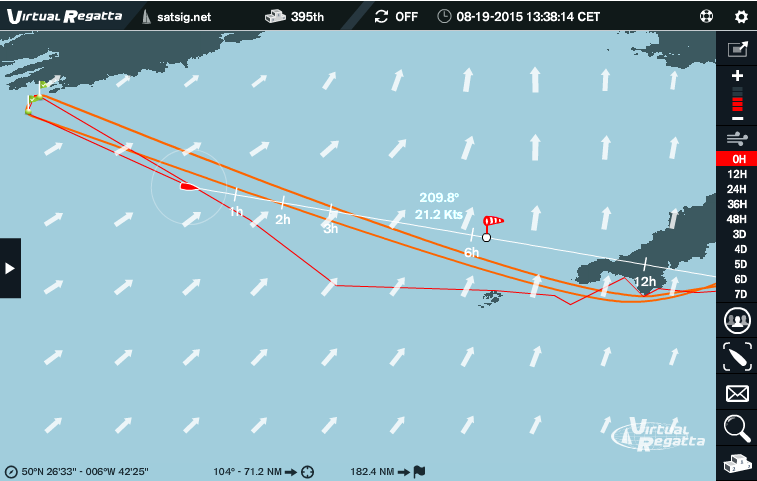 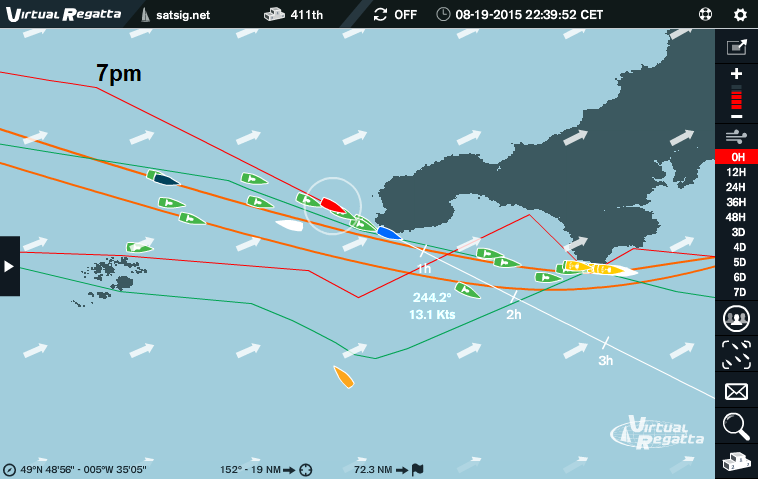 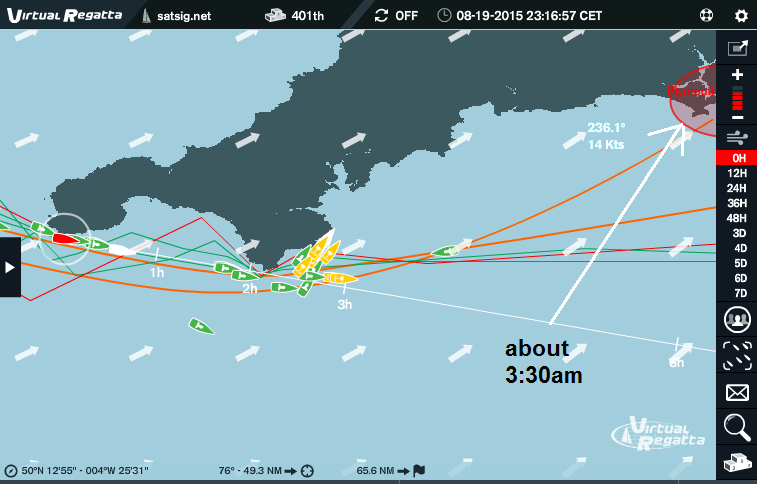 After Lands End I decided to aim straght for Start point. Some boats chose to go inland a while to take adavantage of better angle winds, but this would have needed more attention at night.  It is now 11:16pm!

I woke at 3:15am and turned left, aiming for the finish at Plymouth. 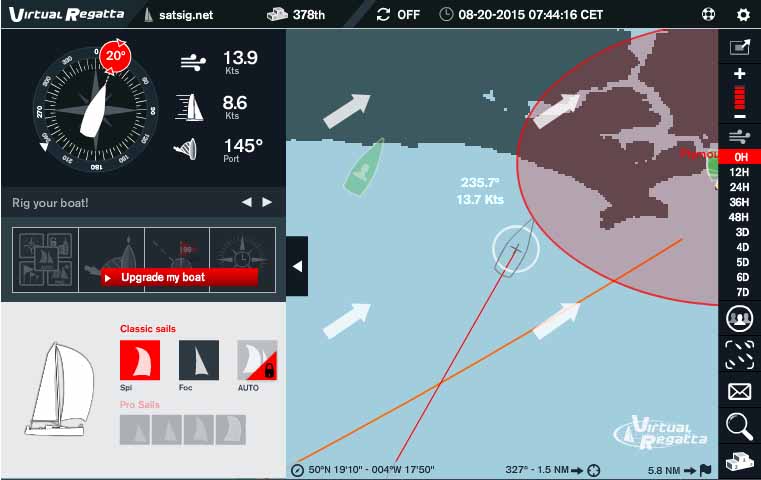 Just a fraction before 7am 20th August 2015, my boat is just about to cross the finish line of the Rolex Fastnet Race, a circle at Plymouth. 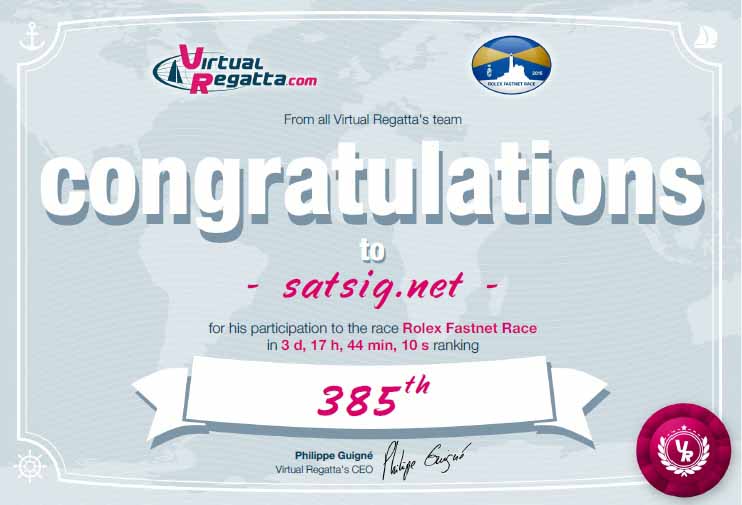 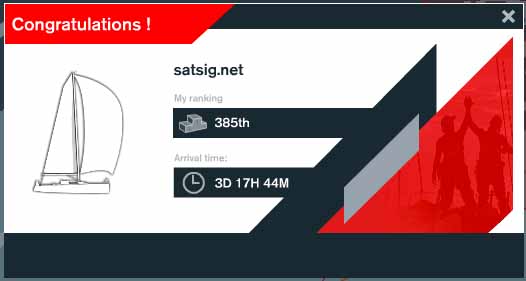 A moment later and I was sent a diploma and saw the above congratulations message.

Key results of some other sailing competitors: