There does not appear to be a real Fastnet sailing race this year so I'm having a go at the equivalent virtual sailing race at https://www.virtualregatta.com

In 2015, I took part in the offshore virtual sailing race and thought I would give this game a go this year.  All the boats are type "Class 40". The name of my boat is satsig.net.  I have equipped my boat with range of sails, Light wind and Strong wind and also have foils on the hull to make it go faster in strong winds, particularly when reaching or broad reaching.  This is my log of the race - from my point of view of course...

Preparations for the start of the virtual Rolex Fastnet race.

Six days before the start I considered the course. If the wind is from the west then it becomes quite difficult to get out from the Solent. As forecast now the wind is from the south west from 204 deg, so steering at 243 deg gives a wing angle of 39 deg, which is right on the limit of being too close to the wind, but just enough to get past the Needles without tacking. The actual wind may be quite different in 6 days time.

Start of the virtual Rolex Fastnet race:  My first day at virtual sea since the Covid lockdown. 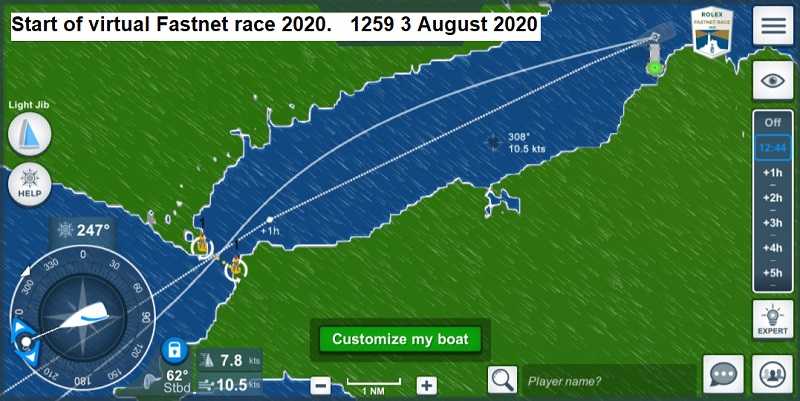 1:30pm During the last half hour  no boats have been displayed, but I have watched what has been happening to the wind. The wind seems to alter slightly every 5 minutes, so have been adjusting the wind angle, now down to 60 deg to hopefully pass between the two markers ahead. My sail choice is Light Jib which seems fine for up to 18 kt at wind angle less than 65 deg.

There are 21,118 competitor boats, some of which will start to be shown on the chart approx 1 hour after the start.

1:51pm My position is 10,724  10.9 kt wind. 60 deg WA. It looked like I might run aground at Hurst Castle as there were intermittent alarms, so I have increased the wind angle to 61 deg to get a bit more clearance, accompanied by a slight increase (+.05kt) in speed.

1:55pm Same grounding alarm with wind changing so I have adjusted to 62 deg WA. Speed up to 8kt.

14:12 having passed the gap safely, now to plot the next section.

14:23pm  Wind angle set to 57 deg, well within the light jib range.  The forecast shows passing Start point in 12 hours. I am uncertain about this as the wind may change and I'm not overly confident that the 'diversion' to the south represents the fastest route so I am going to experiment with some fixed headings. The 12 hour position is south of Swanage and trying various fixed headings made no difference the VMG westwards. So leaving 57 deg WA alone. Will review again in 2 hours, but the 12 hr position looks similar either way. I can't go directly there as that course runs into the coast at Swanage. 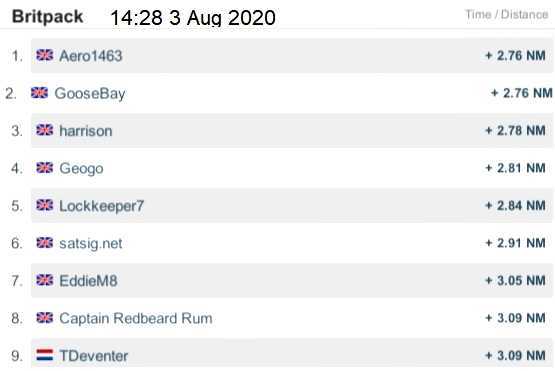 Here is the ranking right now.

There is something very strange about the ranking.  It varies wildly. 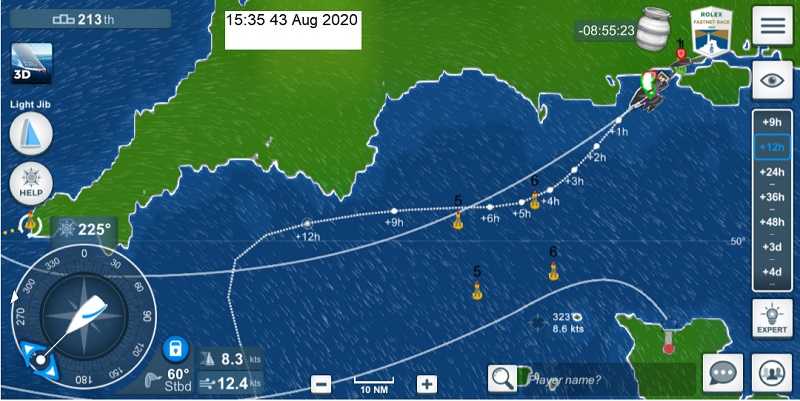 15:35  The other boats are now showing on the chart, which helps a lot.

19:06  Now 3108th   Just past 7pm so maybe the wind is different with new forecast. Not sure. I have increased wind angle to 66 deg with is the maximum with the light jib. Throughout the period till +9hr the wind is stronger to the south of the track so that will help. Also at the +9hr point being able to tack north west might be possible. The wind directions between +9hr and +15 hr are not clear.

19:18 Just 10 minutes later and I've lost 1600 places ! Having the names on the chart screen helps. It may be obvious that changing to 66 deg wind angle made matters much worse, but to boat is going faster and the prospect is higher winds south of the previous track. 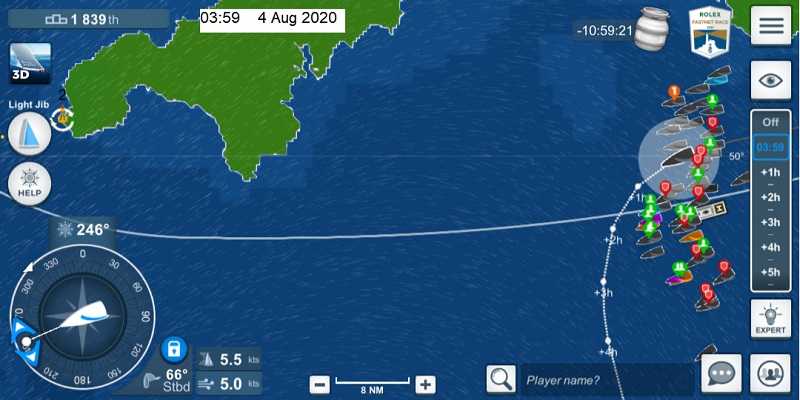 05:30 I waited till the true wind reduced from 280 to 275 to 270 and then at 268 I tacked. I am the only boat that is shown to have done this. I will loose places due to my slow winches. The locked on 45 is OK for a little while till the wind picks up when this can be reduced to 41 or lower 36 in an hours time when the wind should increase to 9kt.  The expected close wind angles should hopefully make me clear the Lizard and not finish up on the rocks at Coverack. 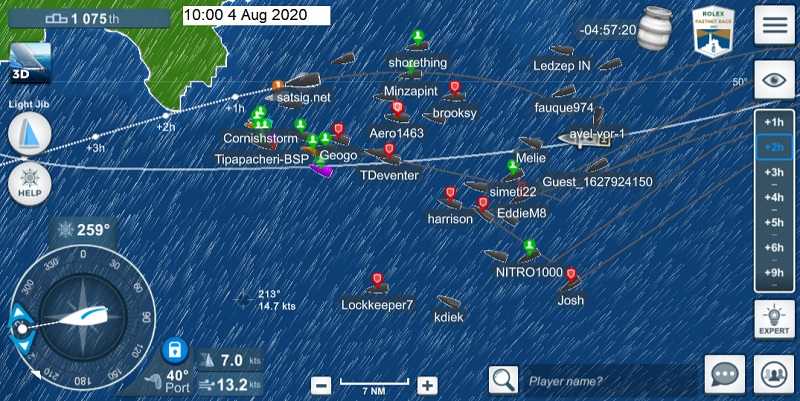 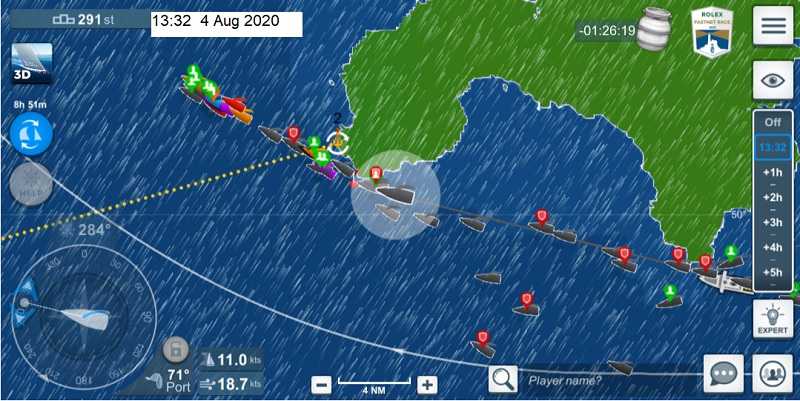 Finally about to pass lands End.  Strange ranking.  When I went to the screen it said "Well done you have gained 11,000 places". 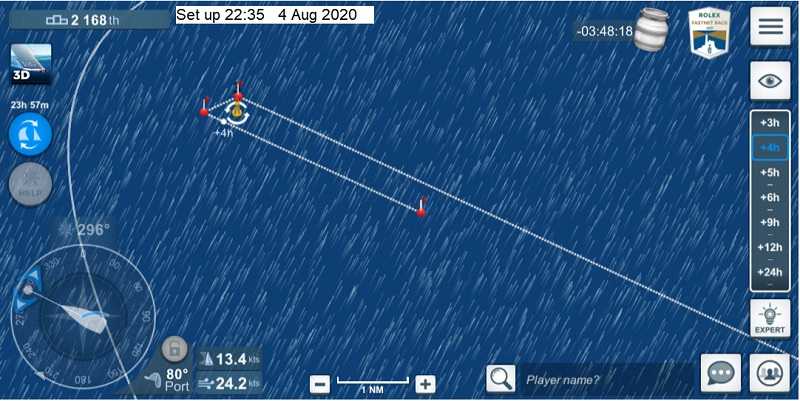 22:34 4 August. I have used two Turning Points and one Auto Sails to set up a plan for the night to get round the Fastnet rock. I have lost my protractor so judging the angles to make the turn is difficult. The danger is accidentally setting a heading that is into wind and getting stopped for several hours.

Woke up this morning to find that I had successfully rounded the Fastnet Rock lighthouse and was headed back. I have even managed to gain some places, apparently up now to 1276th place.  Not quite in the right direction however, so I have just adjusted the course to pass to the right of the next marker buoy.  Also, sail also changed to staysail.  After this screen shot was taken I have changed to wind angle locked at 72 deg wich means higher speeds.

I watched this in real time and turned slightly to the left when passing the island rocks. The first was St Agnes and then Bishop Rock.. Then Then, a few minutes I later, turned sharp left aiming more or less where the all the other boats had gone ahead.

Having thought about what the other boats are doing I was puzzled. 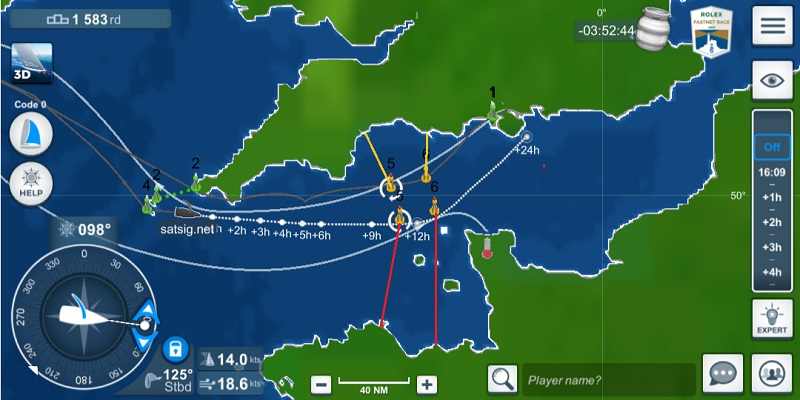 This explains the Casquets Traffic Separation Scheme (TSS) intended avoidance rule.  You must cross both yellow lines or you must cross both red lines. There is much discussion and dispute in the VR forum about this with complex and theoretical ways to circumvent the intended rules. I think it is the first time that a TSS has been implemented and it is quite possible that the software may not work exactly as intended, for example allowing the passing to the north of both North 5 and then South 6.

We therefore need to avoid the traffic separation scheme (TSS) marked with 5 5 6 6. This is a rectangular area where big ships have to follow specific lanes, like motorway carriageways. Small slow boats under 20m, like us, are excluded. It looks like the leading boats are aiming to go round the north of the TSS, but I can't be sure. I have plotted a direct route intending to pass south of the zone and direct into the finish at Cherbourg. A big complication is the weather between +12 and +24 hours. At +24hr the area north of Cherbourg is expected to be flat calm. Maybe the boats going north know better what the weather will do in the few hours after +12. It would certainly help to know. 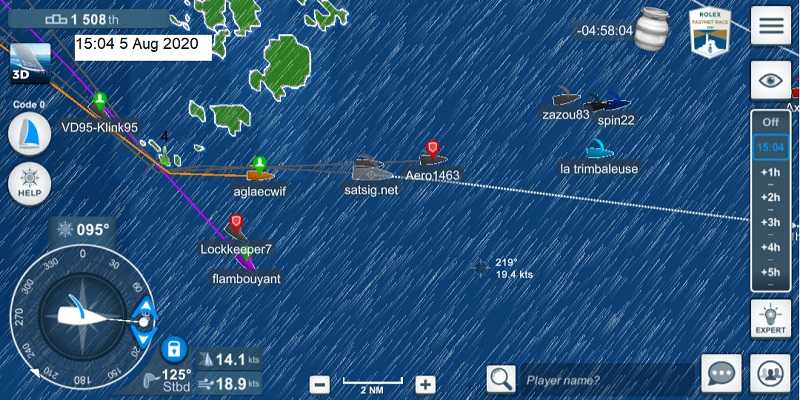 15:04 5th August.   Here is more detail of the nearby boats after passing the Scilly Isles.

7pm Now past lands End and Lizard.  Wind is dropping so changed to light Gennaker sail with following wind. 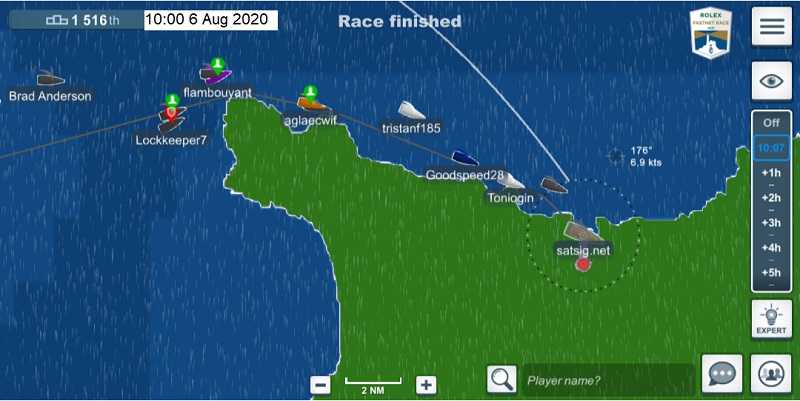 I've just finished, having carefully passed north of the Cherbourg. Wind light about 7kt and using Code 0 sail with wind coming from the side. 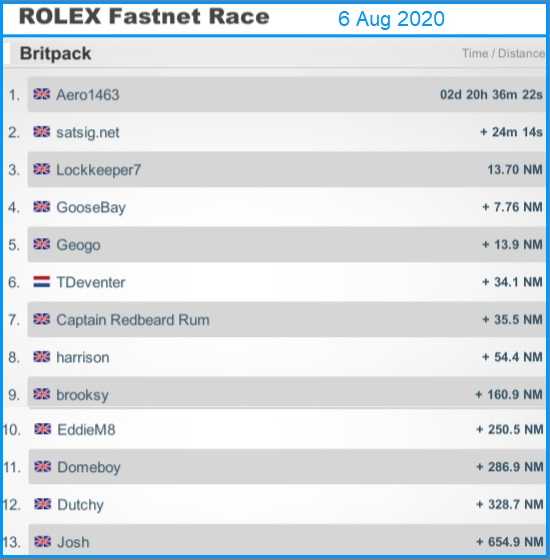 If you want to add anything to this page, or suggest changes, please send me text in an email to eric@satsig.net