On previous holidays we had visited the Morro Jable harbour and tried several sailing trips with different companies, multiple times. I remember well several MAXI sailing trips on Challenger 93 (Fisher and Paykel) which was 83ft long a 1989/90 Whitbread Round the World race boat operated by Kino Quiroga. He no longer does such day trips here but is believed to operate from Lanzarote, doing occasional transatlantic trips, for example Atlantic Rally for Cruisers (ARC). This page here is about our Flounder day sailing trip in Fuerteventura in November 2020.

Before we set off we had a look at several large stingray fish in the harbour itself. These enormous diamond shaped flat fish with long thin tails swum gracefully along close to the bottom near the harbour edge where we all stood looking down and taking photographs. 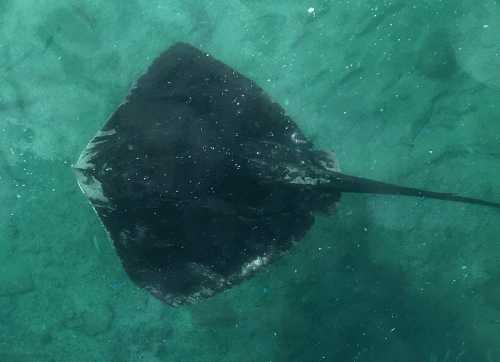 Stingray in port at Feurterventura

The seawater here in the harbour was clearly very healthy, as there were hundreds of smaller fish nearer the surface. 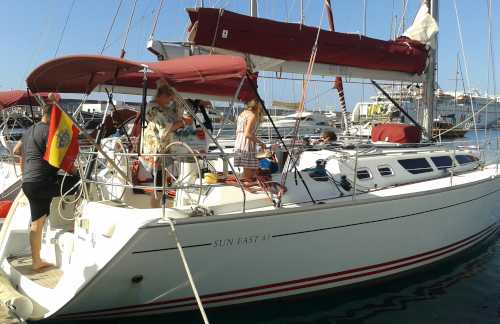 This boat takes up to 8 people per trip to see the dolphins and give you a chance to try sailing the boat.  See: https://www.flounder-sailing.com/en/home/ for more details. We had 7 people plus the captain. The others all spoke German which limited social chit-chat. In the summer the company often runs two boats simultaneously.

Many dolphins passing the coast south of Fuerteventura towards Africa.

Out on the open sea, on this occasion, we were lucky with the dolphins, and had a most impressive show with approx 100 dolphins swimming near the boat, scattered over and area of  approx 100m x 100m, covered with white splashes as they surfaced and swum so fast around, some on their own, others in groups of 2 to 6. They made quite a noise too, with their breathing. The dolphins were going eastwards, towards Africa.

Today the wind was light to medium to start and it was easy sailing towards the hoped for dolphin area. 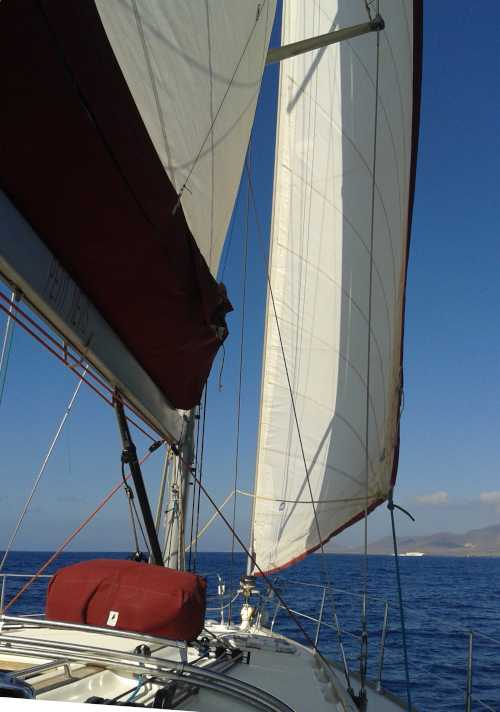 When we found the dolphins the wind stopped completely and changed direction so that we had to zig-zag back towards the harbour. 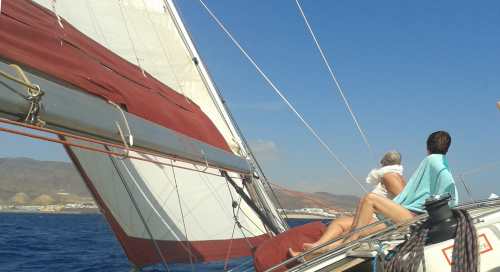 At times the wind became stronger with white tops on the waves and the the boat healed over to about 45 deg. The captain tried to teach me to ease off on the speed and aim up into the wind a bit to reduce the heeling angle rather than keep powering on at maximum.  In all the excitement I forgot that 30 deg tilt was ideal and more than that needed either feathering a bit upwind or reefing the mainsail. 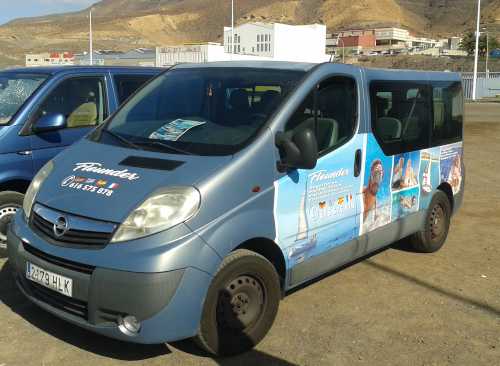 Transport is provided from and back to your hotel.
Phone Mandy at +34 616 57 58 78 and ask about suitable dates and pick-up times

The best way to book a trip is to phone Mandy at +34 616 57 58 78 and ask about suitable dates and pick-up times. She will pick you up at your hotel. Make a booking for early on in your holiday so, if cancelled due to bad weather, then it will be possible to defer a few days to a later date. You can pay in cash on the day or by card, preferably direct to Mandy to avoid commission to intermediaries.  Flounder sailing are not allowed to  advertise in the hotel lobbies as another company has the franchise at a big commission rate.

At the harbour there is also a popular cafe frequented by friendly local people.

We stayed at the Alua Village Hotel, in Esquinzo, where there are opportunities for long walks along the Esquinzo beach, either to the left (north) or to the right (south) towards Morro Jable town.  The walk to the east passes the sailing activities of the Robinson Hotel a snack bar (which was open) and along to a point used by surfers. Beyond that the beach is wild and empty.  To the right, towards Morro Jable, the depth of the sand is less compared with what it was several years ago and it is important to go 3 hours either side of low tide, otherwise you find that you have to walk over large stones and rocks. 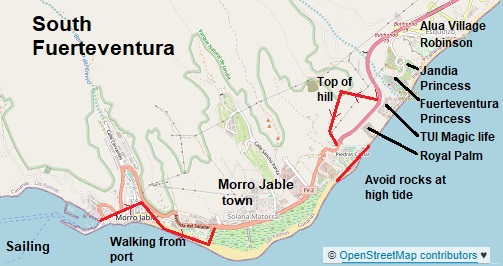 
It is possible to get all the way to Morro Jable and we have done this many times. Consider going in one direction of the journey by taxi.  On this particular holiday we took a taxi to the port harbour, had a coffee, then walked up through the houses and down to the main beach with more coffee opportunities. Then following the beach, past the lighthouse, before getting a taxi for the final stretch to avoid walking on the rocks.  If you go at low tide you pass the Royal Palm, TUI Magic Life, Fuerteventura Princess and Jandia Princess Hotels.  Alua Village Hotel is up the hill above the Robinson.

A less common walking activity is climbing the mountain above TUI Magic Life. The recommended route is via the tunnel under the motorway, then to the left alongside the road till you reach the ridge and an obvious route up direct to the summit. At the top proceed on and somewhat to the left and follow a long path down towards the roundabout with the terracotta figures.  Walking boots and sticks, plus food and water, are recommended. If the weather is bad take waterproofs. On one occasion we had zero visibility in cloud with high wind and sleet at the top!.

We stayed at the Alua Village hotel, which was one of the very few still open. The Royal Palm was an alternative.  This was our first time at Alua Village and we were very pleased.  The resort location is part way up an escarpment over-looking the sea to the south east. The Robinson hotel is close by, lower down on the left.

We were full board and were pleased with the buffet style meals. There was both indoor and outdoor seating and we had most meals outside overlooking the pool and the sea.  Despite the very few guests, the food quality and choice was excellent. Free wine was available for those that wanted it.

The room accommodations were in blocks spaced down the hillside between the pools and the sea. There were significant slopes to negotiate but there were lifts and ramps to help the less able. If you want easy access to your room you need one at the top, near the pools accessible via a lift.  Free WiFi was provided which worked well.

To get down to the beach and the Robinson sailing/windsurfing venue, you followed the sinuous path down between the accommodations till you reached the bottom of the site where there was a gate to the outside. From there it was a 7 minute walk down to the beach. Coming back up took a bit longer!. We saw several small chipmunk creatures and also a baby porkupine.

We travelled out and back on a TOM flight from London Gatwick on a Boeing 787 aircraft. It was a bit scary being at the maximum ceiling cruising height of 43,000 ft for most of the flight, like being an astronaut.