A holiday excursion on a maxi-sailing boat.

During our TUI holiday we went on a Maxi-Sailing trip from Morro Jable harbour at the south end of Fuerteventura, Canary islands.

The trip was advertised in the hotel reception with pictures of the large Whitbread Round the World yacht. It was also included in the TUI brochure of possible excursions on Fuerteventura island. Update: Nov 2020.  These 'Max-Sail' sailing trips no longer operate from Morro Jable. If you want something similar try Flounder Sailing who operate from the same Morro Jable harbour location. 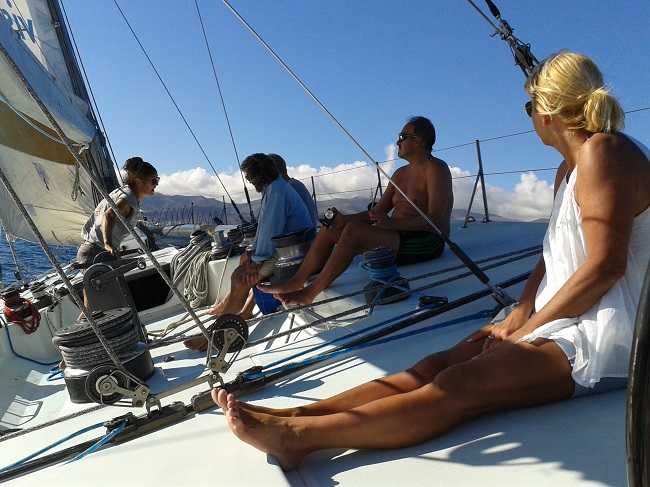 We were on a TUI holiday, staying at the Fuerteventura Princess Hotel at Esquinzo in the Jandia area. I booked up two trips, via the TUI travel agent,  early on in the week we were staying, so that in the event of a cancellation it might be possible to rebook later in the week.  I understood that the trips were very popular and that it was important to book early. It is also possible to book directly or via other holiday tour operators.

The hotel reception had a PC with printer and they were able to print out the weather forecast for Morro Jable from eltiempo.es.  This forecast shows the wind direction and speed (with arrows and wind barbs) on an hourly basis during the current day, plus forecasts with wind direction and in km/hr for each day of the week ahead.

Each excursion lasts 3 hours and needs at least 6 guests to make viable.  There are 3 expert crew, the captain Kino and his son Sinbad, plus one other - I did not get her name. Anyway they were very capable and dealt well with all that occurred. The captain had sailed round the world in the boat in 1989/90 and come second in the Whitbread race. This race series is now called the Volvo Round the World Race.

We motored out of the harbour and turned the boat into wind, preparing to get the sails up. Starting with the main sail we pulled down on the main halliard next to the mast while others worked a winch to pull hard on the rope. Slowly the main sail went up and we finally got the luff (leading edge) next to the mast tight.  The front jib sail went next. It was already hanked onto the forestay and slid up easily. Again it was tightened well as having the luff of the jib and the forestay correctly tight is the key to good sailing into wind. You don't want it so tight that it is straight as this will overstress the mast in compression and break it. On the other hand you don't want it too slack as this will cause the forward edge of the jib to be too much curved and you won't be able to sail so close to the wind. The deflection half way down the luff of the jib from a straight line should be told to you by the sailmaker.

AIS beacon transmitters are installed on all large vessels and many smaller pleasure yachts. An AIS transmitter collects location and speed data from the boat on board electronics, such as GPS, and transmits a broadcast of this information to nearby boats and any nearby land based AIS receiver, or even upwards to a satellite!.  Included in the message are optional data such the intended destination, as typed in by the crew.

The AIS transmit beacon on CHALLENGER 93 may not always be switched ON.

I have been trying to identify the location of the nearby AIS receiver which is sending data to the internet. It may be at Club Nautico Peninsula de Jandia, at approx lat 28.05 long -14.36, equipment SLR300N. Such members of the public who have set up AIS receivers and connected them to the internet deserve our thanks. When satellites are used to receive the messages the system is called Satellite-AIS (S-AIS).

On board  CHALLENGER 93 their AIS device is called Class B which means they receive as well as transmit.  Thus on board they can have their own display of nearby vessels which have AIS switched ON.  Such a display will show a line in front of each boat in the direction they are going with a length corresponding to the speed.  This gives some idea of potential collision situations. It is not to be relied upon however since the AIS messages may be absent, or wrong due to interference or other factors.

Go to the MarineTraffic.com web site to see current details for the last 24 hours. The registered boat name to search for is CHALLENGER 93.

We sailed around in what appeared to be a rather arbitrary way with each of us having a chance to steer.  At times we were trying to sail on a course, keeping to a particular compass heading. In this case we should have been trimming the sails to match the changing the wind direction.  All this time adjusting the sails for maximum forward drive force by letting them out almost till the airflow begins to breaks down. Trim the outhaul on the boom for 12% chord depth. 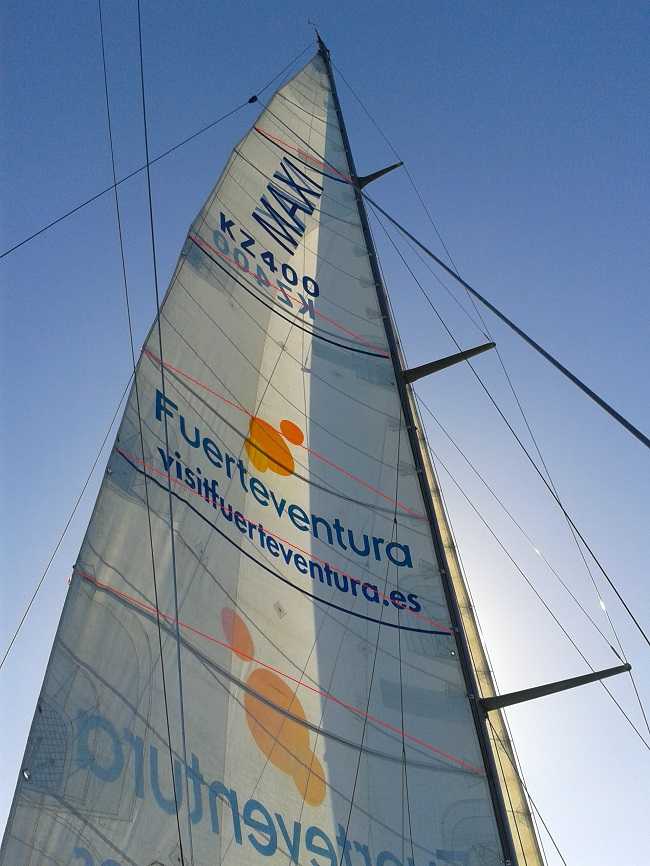 If you take a picture like this directly upwards from the boom you can get an accurate measurement of the chord depth. See the red lines which I have superimposed. You can also determine the twist on the sail.  Near the top the wind is stronger so the apparent wind comes from nearer the true wind direction. At the bottom, near the boom, the wind is lighter and the apparent wind comes more from the front of the boat.

At other times we were sailing into wind and in this case it was appropriate to trim the sails correctly for windward sailing and then keep altering the steering direction to maintain the ideal apparent wind angle (AWA).  In this instance we were getting about 6kt boat speed, with a true wind speed (TWS) of about 8kt, true wind angle (TWA) of 48 deg and apparent wind speed (AWS) of 13kt at apparent wind angle of 34 deg. This all looks seems very theoretical;  in practice you do fine by steering according to the air flow across the front and back of the jib. Just keep all the tell tails flying smoothly. If you have extra people to sit below deck calculating, then good, you can get them to work out if you are sailing at maximum speed according to the design polars. It helps to record facts about sail positions, wind etc so you can repeatedly set up the best positions. 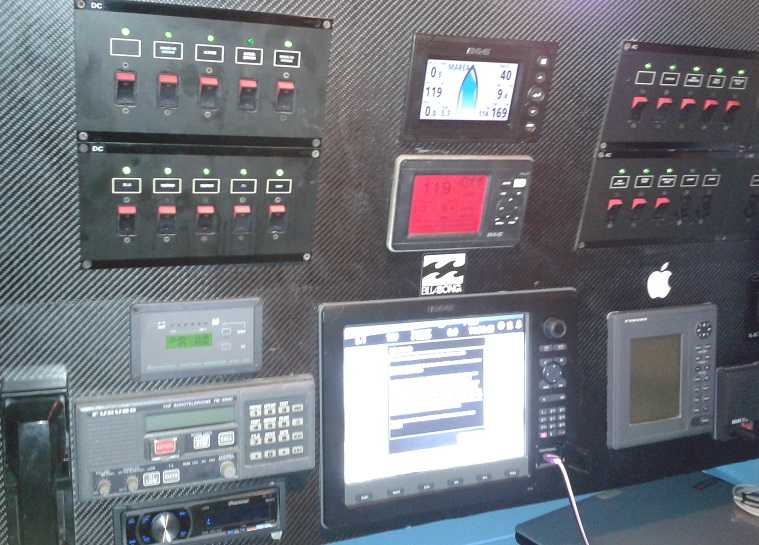 Instrumentation for Round the World sailing includes displays for heading (compass direction), apparent wind speed, wind direction and water depth. For navigation, electronic map charts are used coupled with GPS to determine position. As a back up, a sextant for celestial navigation using the time and measured sun and star angles is carried. For communications, short range VHF and long range HF SSB radios are used. This boat did not appear to have any satellite communications capability. The upper switch panels control lighting etc. 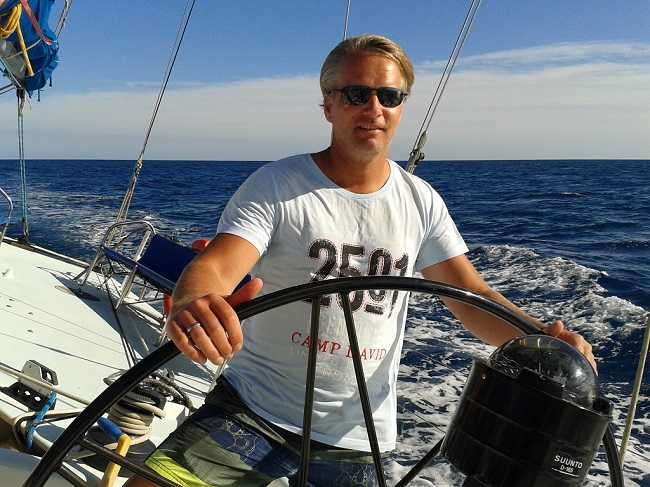 One of the guests helming this Round the World race yacht.

To make things more dramatic the boom was pulled in too far so that it was on the wrong side of the centre line. This caused less drive force but much more heeling (sideways capsising force) so we tilted over sideways at about 45 deg. This was good for drama but not ideal for windward sailing where you should aim for about 30 deg heeling maximum. 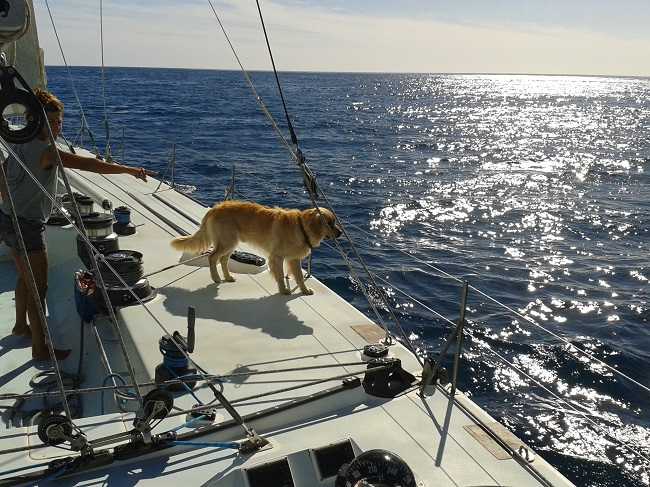 Most of the time on this trip was easy sunshine sailing. In the above, both crew and dog are watching the dolphins. The waves were quite small and no one felt sea-sick. Around the south of Fuerteventura the sea is sheltered from the northerly winds. The north winds still blow however but vary somewhat in exact direction and strength due to having come over the mountains.

If you fancy something similar you can book a longer trip on the Clipper Round the World race. They organise training beforehand and you sign up for one or more 'legs' or sections of the whole round the world journey. Good luck.