I've made a speed tester ( above link) and would be interested in your experience.   Best regards, Eric. eric@satsig.net 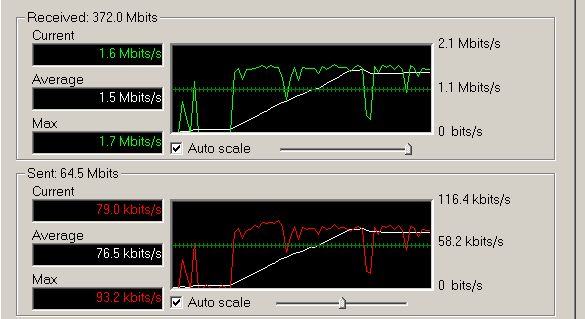 This is a screen capture of a 12Mb file being downloaded from a server in Ireland. The black windows represent 30 samples taken at 1 second intervals. The sampling is done at my NIC. The green line is the RX speed at any given second, the red is TX. White lines show data/time averaging.

Note the two spikes at the front end, followed by a no-data gap. Those spikes are sampling bursts that get analyzed by the Hughes gateway server. The information derived is compared against gateway loading, customer rate plan, et cetera, and sets the eventual burst rate.  The dips in the red/green lines are burst intervals and/or bursts of varying speed. This particular sample is from a low density distant server, captured outside of peak internet hours. Samples taken from busy servers during peak hours are significantly more erratic; lots of stop and go, wildly fluctuating averages..

It's for this reason that such a brief test will not likely produce a result that is representative of a HughesNet consumer-grade connection. The test needs to be engineered to compensate for the up front sampling interval, and discount them from the data/time calculation. That's the easy part. More challenging is producing an upload speed test that will accurately consider the HughesNet inroute compression algorithm.

What protocol? You're aware I believe, that Hughes uses a HTTP accelerator on outbound packets. The configuration is such that we customers cannot bypass it. Other protocols will give different speed results. The burst characteristics of Hughes system is such that such a short test is usually far from accurate. Their own test is JAVA based, testing through a sequence of 100k/300k/2.9m patterns separated by time. That permits averaging of the uneven bursts. On the outroute. There is also a delay between test file request and the actual transmission - necessary so that the latency differential won't influence the calculations.

It tests inroutes at the same time, same principle - just smaller test files. But the inroute tests use some reportedly tricky math due to the proprietary compression algorithm