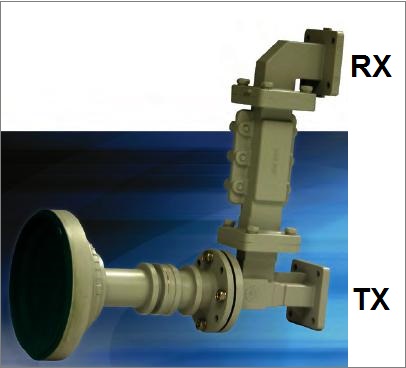 As shown it is transmitting (using the central rear waveguide port) vertical polarisation.

It is receiving horizontal polarisation via the receive-band-pass/transmit-reject filter in the side arm.

If the entire assembly were rotated 180 deg so the side arm was downwards it would be still vertical transmit and horizontal receive.

If the unit is tipped on its side, to either side, so the arm sticks out at the side, the receive polarisation would be vertical and transmit horizontal.

The four alternative positions, at the top, bottom, left or right sides are STARTING positions to be used prior to making the polarisation angle adjustment, which depends on site location and satellite orbit longitude.

As shown below it is both transmitting and receiving horizontal polarisation. 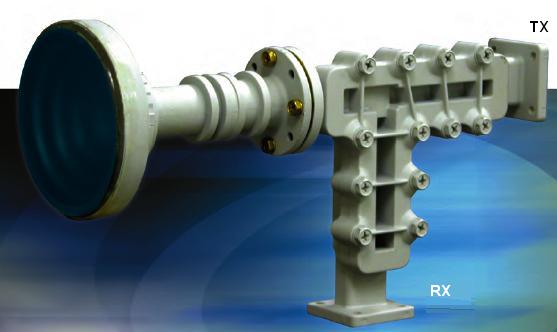 The diplexer filter assembly in in two parts, corresponding to the frequency bands:

Back to VSAT feed assembly with transmit and receive ports

All pages on this satsig.net web site are Copyright Satellite Signals Limited © 2005 all rights reserved.