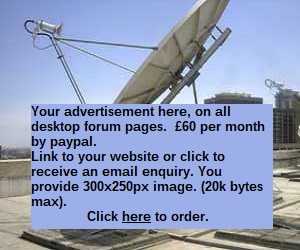 Welcome, Guest.
Welcome to this satellite broadband discussion forum. Wherever you are and whatever your problem we are here to help each other. Connecting to the internet via satellite is not always easy but is critically important to those in remote places or with poor terrestrial infrastructure. Service providers and customers are encouraged to contribute. Register at the bottom of the forum home page if you wish to contribute or ask a question. VSAT service providers and satellite equipment sellers may feature their products free of charge; just register and get posting. Paid-for adverts, top left and top right, on all forum pages, are also available. Read the Forum rules.