In this example, the reflector is an offset design with the feed on an arm at the bottom. It may be Echostar mount with a 1.2 Prodelin dish There is a triangular structure behind the dish.. 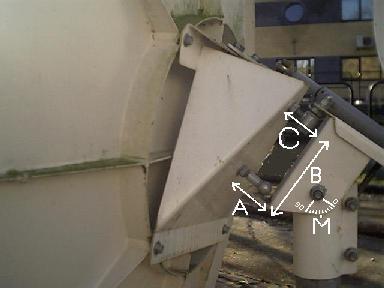 In the above design of polar mount the polar mount dish offset tilt angle is achieved by setting length C greater than length A, so as to tilt the beam downwards a little.

Tighten up the hardware at A, using the fixed length spacer to define the gap. The nut shown above at the end of the spacer may or may not be required. The length A must be sufficient to allow the dish to swing freely to either side.

Write down the required polar mount dish offset tilt angle (it is a small angle less than 9 degrees) and calculate the tan of angle using a calculator. A suitable calculator is at start - programs - accessories - calculator - view - scientific. Check the result is consistent with the values in the table below.,

Having set the two angles really carefully, centre the actuator and point the whole head assembly to due south by rotating the canister on the pipe at the bottom.