Over last years there has been a lot of work going on, clearing the area behind the hedge.  The hedge itself has been revamped with all the grass dug over and new hawthorn shoots planted. In the process, which also included the digging of a trench and cable laying, the soil along the verge has been distinctly disturbed.

Reworked verge alongside the road.
Approx 45 plants, many good, both inside and outside the new hawthorn hedge in disturbed soil.

Seven years ago there used to be about 6 Deptford pinks along this stretch of verge (see below)  but they were getting much overgrown by grasses etc.  The disturbing of the soil had done good and  in Dec 2020 I counted about 95 plants. Last week there were 45. There is some cultivation going on to add extra flowers etc and it is looking good for summer 2021. The winter has not been too dry or very cold and of the 45 plants many are in good shape to produce multiple flowering shoots in Summer 2021.

Verge by the allotments. Only 5 plants survived. Small and in poor condition.

Further along, between the allotment gate and the church there are only 5 plants left. Vehicles tend to drive over the verge area and  maybe this has affected results. Maybe the many plants last year simply lost their seed heads. Each plant produces many hundreds of seed and the success rate is well under 1%

I've been watching closely over the winter and seen a number of maturing plants in the verge outside the allotments and between the allotments gate and the churchyard.  The verge belongs to the church and I was hoping that no one would come along and strimmer the plants. They have survived so far till now, 25th June 2020. In the last two months the flowering shoots have come zooming up and in the last week the flowers have come out.

Here is a close up of the flowers in the verge

27th June 2020: Total 141 flowers on second year plants.  40 first year seedlings.  Up near the main road there has been disturbed soil since winter.  3 flowers and many seedlings have appeared but not sure what they are as some types of weed seedlings look very similar. Over the other side of the common at the road junction in the corner opposite the heritage centre entrance path is one single plant with one flower embedded in dense grass. All plants on the bad soil area have died.

In 2010, there was just one plant.  In 2012 there were two plants. In 2014, about six flowering plants were noted along the verge by the Church, one towards the main road end and the rest near the allotments.  Of these, at least four produced several hundred seeds.  Hidden amongst tall grass the ones nearest the road survived well. After disturbance of the verge by diggers and heavy vehicles many green low level seedlings sprung up along verge in mid 2015.  Interestingly a strimmer was used to clear the verge and it missed the tops of the low level first year leaves (about 1 inch) and had no effect, as they were not going to produce tall shoots and flower in year 1 (2015) anyway. The strimmer fortuitously cleared many of the taller weeds so maybe it had a beneficial effect!. This spring (2016) many of the first year plants have survived and are now in their second year of their biennial (2 year cycle) and producing quite different foliage in the form of tall shoots (potentially up to 3ft tall) which will hopefully get to flower and seed unless prematurely tidied up by "verge maintenance". Such are the trials and tribulations of being a wild flower! 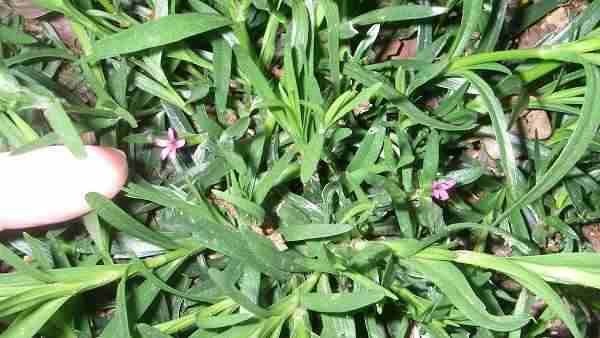 5th May 2016: Discovered this morning. The first three flowers of this spring. Two are shown. They are small pink flowers, about 1/4 inch diameter. Many more to come, and hopefully more brightly coloured than these first rather miserable washed out specimens! 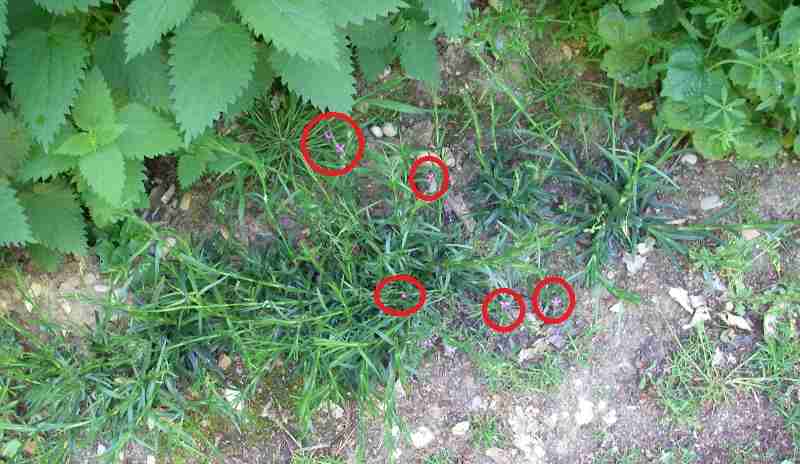 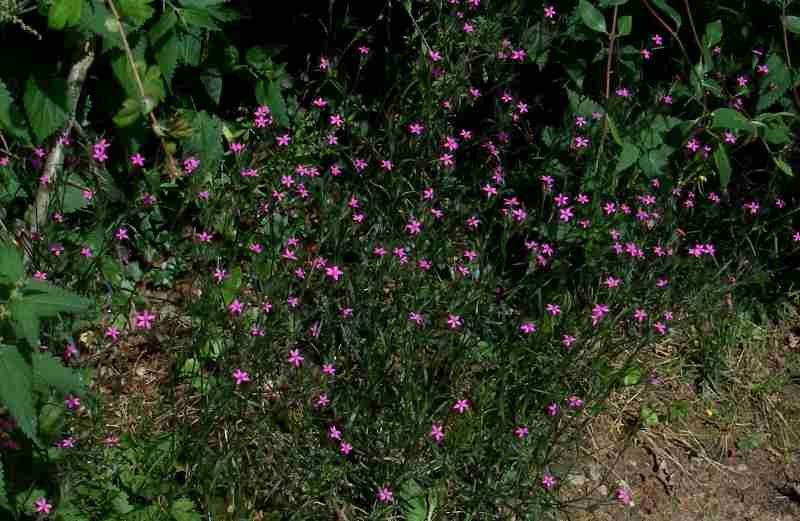 14th July 2016.  This picture above taken outside the allotments near the church. Exposure value -2, otherwise the flowers are overexposed. Just hoping that no one thinks is good idea to clean up all the verges with a strimmer... Total flowers (not plants) approx 10 times what shown here, i.e. approx 2000 flowers.  2000 x 50 = 100,000 seeds.  Yippeee!  About half the total plants, in a more shaded location to the south side of the allotment gates, are not yet flowering. There are about 10 further plants flowering now, along the hedge close to the road junction, with about 5 to 30 flowers per plant, embedded in long grass.

11 October 2016. The story this summer:  It has been very dry and the vast majority of the flower bud have failed to flower and set.  The ones in the picture above were lucky to get into flower while there was still some moisture around.  The majority of flower heads simply dried up and did not flower and make seeds. 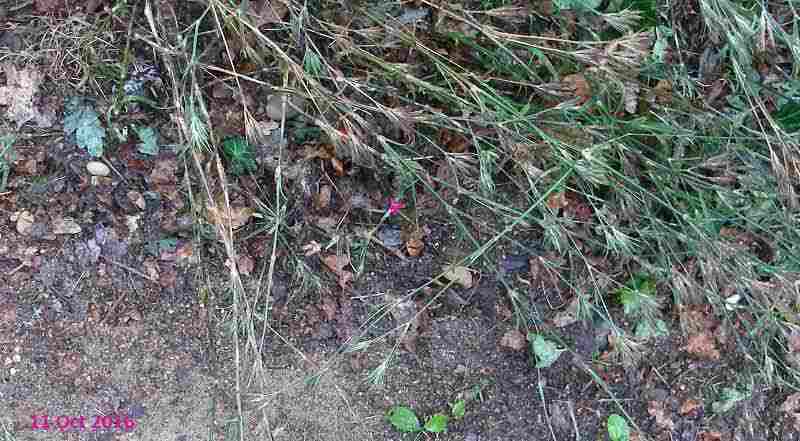 In the last week or so we have started to have some rain and there is now one flower near the allotments. See above. I have coloured it in by hand with the approximate colour pink, so you can see it. Lots of dried up seed buds are visible. About 2% of these have perhaps 6-10 seeds, instead of 100% seed heads having 30 or so. Sad.

11 Oct 2016:  Today there are about 6 flowers. By the road near the traffic lights there are four shoots, each with one or two flowers. These plants are embedded in big foliage and I am surprised how well they have done. Flowering has been noticed in July and October, with none in between due to drought. 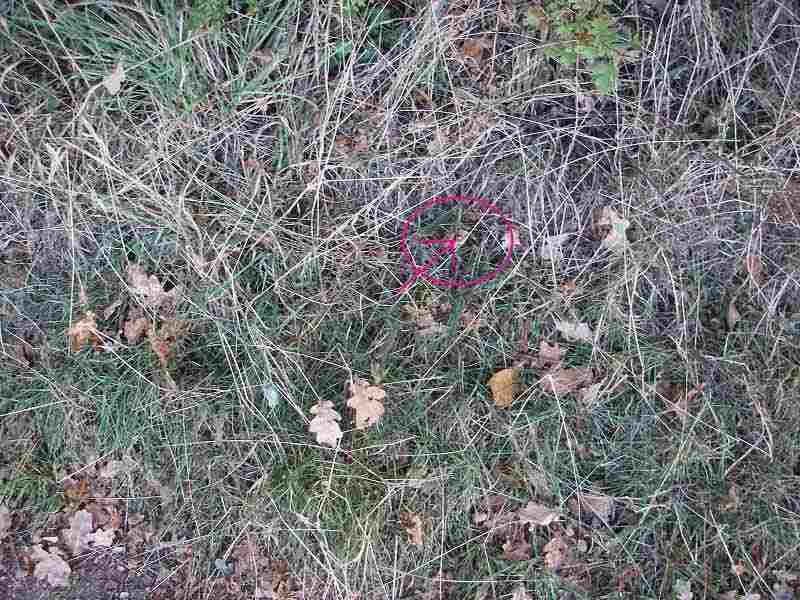 Two shoots are hidden in the grass and two are tall, about 3ft high having made their way up through other plants. It is hard to see what is growing at ground level but looking at this picture there may be some first years plants near the road edge. We will see. This area does not get 'tidied up' or weedkiller so there is hope.

I've seen only one low level year 1 plant this year. It might get through  the winter and flower next year. So hope for one flowering plant next year!!.  The number of seeds in 2016 has been in the hundreds rather than many thousands so there is a good chance of some seeds germinating next spring and making low level rosettes, non flowering next summer.

Things should be quite good.  Hopefully the low level rosette, non flowering,  plants next summer (2017) will hopefully go unnoticed and survive till spring 2018 when I look forward to seeing them flower - if I am still around !

Looking back on the past few years it appears that the digging of a ditch two years ago, and then filling it in, along the hedge disturbed the soil and got things started.  It may be that we are now set for seeing flowers every two years for a while.

Snow scenes in Essex 31st Jan 2003.   I went for a walk with our dog Bosie early on and took these pictures:

Fungi growing on dead trees on the Common 6 December 2004.