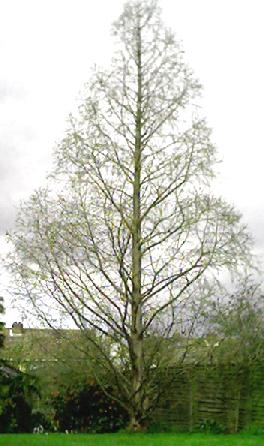 In winter with no leaves 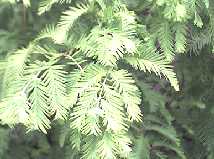 The metasequoia glyptostroboides tree has a reddish coloured tapering conical trunk and delicate branches which spiral, slightly - very unusual.  The trunk also has a twisted appearance.

The foliage is lovely, coming out fresh each spring in bright green and fluttering in the wind.  In the autumn is turn a beautiful brown before all the leaves fall.  This is good as it brightens up the garden in winter and also reduces the chances of it being blown down in high winter winds. 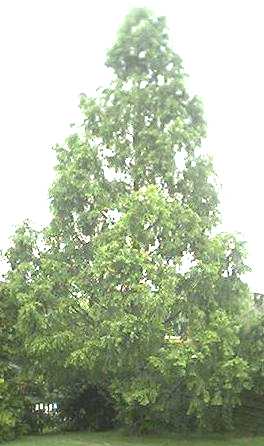 In summer with leaves

In the winter of 1005/2005 we noticed for the first time that there were a hundred or so small spherical cones with a spiral construction.  These fell down and I put them in a cardboard box and rattled them from time to time.  In May, I stared pulling the cones to bits and extracted all the seeds I could find.  There were hundreds. The seeds are brown about 0.5mm, each at the centre of a thin brown disk about 3mm diameter.

I mixed the seeds with a little sand and added water so they got well soaked for 24 hours.  I then put them in the fridge for one day and then in the freezer for 2 weeks.  After taking them out I put then across the top of a small seed tray for two weeks.  They were buried in sand/peat about 5mm deep.  It was quite cool.  Then the weather warmed up and it got quite hot in the conservatory with the sun shining in.   After 10 days in the warm, suddenly about 25 shoots appeared.  Big disappointment - when they reached about 2 inches high I realised they were just weeds.   None of the Metasequoia seeds had germinated at all   !

This winter our tree produced hundreds of cones and they stayed up the tree till February.  We had lots of really cold frosts so the seeds got some good chilling up the top. I collected the cones up making about half a bucketfull. Then shook them up and tipped out the cones leaving the seeds at the bottom. A thousand or so, I would guess.  Anyway I sowed the seeds in several trays.  Some I put in tissue paper and put them in a teacup with boiling water for a minute to simulate a forest fire.

April 28th 2011: The untreated seeds may have started to germinate.  See above.  Based on the previous experience above I am uncertain - they may be weeds or even tomatoes. Lets wait and see.  If they are real Metasequoia then the germination rate is very low, like 0.05%. The one hope is that the leaves above do look like the real leaves on the tree. It is interesting how all six seedlings appear to have come from seeds that were at the side of the soil, next to the plastic.  There were many seeds put into each square hole approx 1.25 inches side. 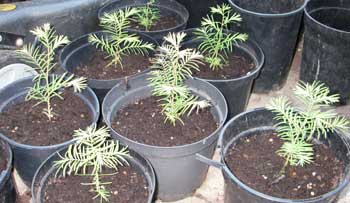 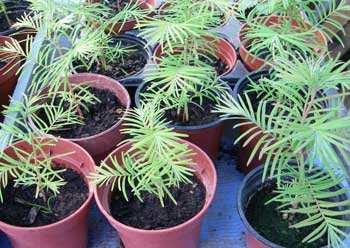 Same batch: These are in smaller pots

The seedlings have continued to grow, generally well. They are definitely metasequoia glyptostroboides, and not weeds !.  Two died and three have not got beyond the 1/2 inch high single stem. In these 'slow' cases, the brown seed case came up in the air and seemed to trap the two starter leaves and the starter leaves never came out leaving a 1/2 inch high single stem which is green but does not do anything for month after month. One seedling is only a couple of inches high, very scraggly with multiple short side branches.

At mid June (40 days ago) I started another batch of hundreds of seeds and 5 have germinated so far. They are not looking good. The two starter leaves keep being trapped again. One is still looped over with the seed pod in the soil, maybe that one will pull out properly.   I've tried putting poly sheet over the others keep the humidity at 100% and put a drop of water every few hours on the seed pods which are up in the air.  We will see. All 5 died after having grown to 10mm high stalks, so have scrambled up the soil surface and started hoping. 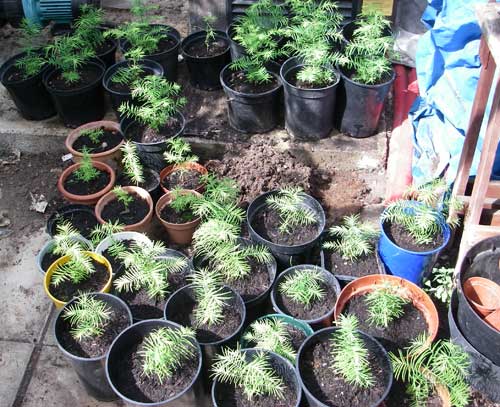 9 August 2011. Here is a picture of the remaining plants.  One plant suddenly drooped, went brown and died.  39 plants remain, of which 3 are looking a bit dodgy.

We have seen many of these trees growing at the Keukenhof gardens in Holland while on cycling and barge tours in Holland and by the warm Gyogyfurdo thermal spa pool at Heviz on our cycle tour in Hungary from Vienna to Budapest via Lake Balaton.