Is Africa in a Digital Quagmire?(Feature Article of Saturday, 6 November 2004 )

Africa opened its satellite space segment (Long haul) to a lot of satellite operators (12 in 2004) as a means to get cheaper bandwidth to the Global Internet but today Internet bandwidth cost are still very high compared to the rest of the world and average working professionals cannot afford the Internet -- Is Africa in a digital quagmire?

Bandwidth is the major determinant of Internet cost and the medium of long haul bandwidth delivery is also a cost component. Until recently Africa has primarily received her long haul bandwidth through satellite. Liberalisation and competition in the satellite market has over the years not affected Internet cost as expected. The recent deployment of fibre in the case of SAT-3/WASC/SAFE from Sesimbra through Dakar to Johannesburg with landing points in some coastal countries and SEAMEWE from Norden through Sesimbra to Djibouti with landing points in some of the North African countries, present alternate long haul bandwidth delivery through fibre optic undersea cables.

In most countries in Europe and in the US, the prices of high speed Internet connections have declined dramatically in the last few years because of competition but Africa has not seen such developments. Where ADSL (Asynchronous Digital Subscriber Line) technology is available, the cost per month for a 512 kbps (bandwidth) line is 25 to 40 USD per month. Dial-up lines cost about the same, if you include telephone charges for 15-25 hours per month. In Africa, the cost of a dial-up connection is often more expensive than in Europe, but only gives half the performance. A shared fixed line - often called a VPN (Virtual Private Network) - will often cost 300 to 500 USD, for a very mediocre performance.

Anecdotal evidence from West Africa thus far indicates that SAT-3 has had a negligible impact on improving broadband access or lowering prices as most customers continue to rely on satellite for international connectivity. For example in Ghana, a monthly half circuit 2Mg (E1) bandwidth cost between four thousand (4,000) and six thousand (6,000) US dollars over satellite while the same bandwidth cost twelve thousand dollars ($12,000) over the SAT3 undersea cable which lands in Accra. It appears indeed that in the best case scenario, the cost of the Internet is 25 times as expensive in Africa as it is in Europe; this is the case in the capital cities but, to the exception of these cities, bandwidth remains 100 to 400 times more expensive in rural and semi-urban sub-Saharan Africa than in Europe. If you also consider the vast difference in incomes between most African countries and Europe, the difference becomes even greater. Measured as the number of hours you must work to pay for an Internet connection, a user in Africa is disadvantaged by a factor of 100 or more.

Africa is disadvantaged because it does not have the critical mass of Internet users in order to affect reduce Internet cost and on the contrary Internet is too expensive to generate a critical mass of users to make an impact on cost -- forces of demand and supply. Hence Africa is in this vicious cycle which must be broken.

African Telecoms have being largely run by government owned (or privatised) incumbent telecom operators who bought bandwidth from the satellite operator, Intelsat. In the mid-nineties it became clear that these incumbent operators where inefficient and stacked, also due to general economic decline. At this point the Worldbank, IMF and other Brettonwood's institutions largely championed the need for liberalisation and competition in telecoms. This was part of the Structural Adjustment Programmes (SAPs) proposed to developing countries including those in Africa. The World Trade Organisations Basic Telecommunication Services Agreement (BTA) of 1998 also played a catalytic role. Some countries like Ghana responded and liberalized all their three (3) telecom market segments. Lead by Hon. Edward Salia, the then Minister of Transport and Telecommunication who had a vision to open the market, Ghana liberalised her long haul, PSTN and ISP market segments. This brought competition to Intelsat in the satellite space, Ghana Telecom in the PSTN segment and introduction of ISPs (new operators) in the Internet access market. Despite this liberalisation and competition in the Ghana telecommunications market the fact still remains that Internet is more expensive than the average working Ghanaian can afford.

There are three schools of thought that respond to the question of why competition has not worked in Africa. One is the fact that the liberalisation and competition programmes did not establish good, independent and effective regulatory institutions and promulgate regulations that created a level playing field as well as challenge incumbents telecoms and "cartel activities". Essentially we had regulators with the cane but could not whip. Another school of thought aligns the problem with the fact that Africa and for that matter developing countries, have to pay double circuit to connect to the global Internet which means that they indirectly pay for the rich to access them. This thought pattern raises the unfair practice in general Internet pricing which does not favour Africa. Why was the principle of "accounting rate" (paying half circuit) for international settlement in the telephony market not applied to Internet bandwidth market? The fundamental shift from pricing Internet which does not favour developing economies raises questions of ambiguity and unfair play. There is need for developing country leaders to stand to this challenge and negotiate within the international forums to reverse this trend. Questions are; do we have such leaders who understand the issues and can articulate them? And if they do would the developed world who are beneficiaries of this system respond at all?

The third and final consideration is that though there are a lot of satellite operators covering Africa that has not reflected in the supply/demand forces of competition. This suggests the idea of a "cartel" among these operators. 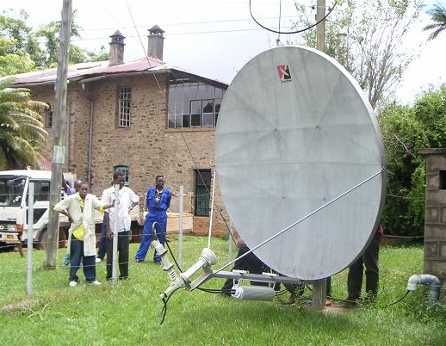 Mike Lawrie, an Internet Expert and one of the founders of the Internet in Africa argues that there is need for Internet cost to reduce and that if the forces of demand and supply have not affected price to an appreciable level all these years than one can only suggest that there is a cartel activity going on. Mike basis his argument on the fact that bandwidth is the major determinant of Internet cost and he iterates that once long haul bandwidth cost goes down, it would be reflected in the retail market. He concedes though that local loop unbundling activities by incumbents also affect cost and there is need for us to take a critical look at our costing models especially when it comes to telecommunications.

William Stucke who is the chairman of the African Internet Service Providers Association  argues that though these factors count, there is a fundamental need for Africa to build her own Internet infrastructure through the establishment of Internet eXchange Points (IXPs) in various countries and the building of a Pan African Internet eXchange (PAVIX) to keep national Internet traffic local and African Internet traffic regional. William further argues that the strengthening of the private actors namely ISPs and Telecoms operators through trade association to undertake these ventures makes for a better consolidation. Africa needs a certain critical mass of infrastructure in order to negotiate for fair terms and conditions. Currently it is estimated that it cost African US$500 million a year for exchange local and regional traffic internationally. Example, your e-mail to a next door neighbour goes to the US and back so you pay to send the mail thus far though it is due for your neighbour.

The introduction of competition is our satellite, telecom and ISP markets have not had an effect on the price of Internet connectivity so that the average working Ghanaian can afford. This raises the question as to why competition in these markets have worked in other parts of the world but not in Africa -- suggesting that the vicious cycle still exist in some form.

Recent penetration of fibre cables around Africa presents the other side of the argument for monopoly but that has also not reduced Internet bandwidth price, actually that has increased bandwidth cost higher than on satellite. SEAMEWE is a France Telecom project from Norden through Sisembra with landing in Tetuan, Mazara, Alexandria, Suez and Djibouti on the North Africa side going through Asia (39,000km of submarine cable from Germany to Japan, Korea and Australia). The SAT3 and SEAMEWE undersea cables have not had an impact on the price of Internet bandwidth. Some argue that this is another representation of a "cartel", because it is made up of the incumbent telecom operators who have monopolized (and some still do) telecom operations in Africa. Others think it is purely a lack of a big enough market to make an impact on the unit price of bandwidth allocations. The market is not big enough to make an impact on the forces of supply and demand in order to reduce cost.

The SAT-3 consortium is made up of incumbent telecom operators who form a "deal club" -- having no interest to widen competition. The region suffers from high international rates and an over-dependency on satellite due to the monopolistic practices of the consortium, which has resulted in Sub-Saharan Africa (SSA) having the highest prices for international calls and broadband access. The establishment of deal clubs creates the breeding ground for cartel pricing and the SAT-3 consortium is no exception.

The consortium currently prices capacity way above the global price market structure for backbone transport. For example in Ghana where the cheapest access on the consortium cable can be found, a half-circuit E1 (2Mb/s) channel cost twelve thousand dollars ($12,000)/month compared to the other half circuit (longer) of three thousand dollars ($3,000) globally. The three (3) times cost of the African leg raises questions of why. The consortium argues that there is no competition on this side of the market, as opposed to competition in the international market. This is pointing back at competition but empirical evidence exist that competition has not worked in the satellite medium of Long haul bandwidth delivery, is Africa in a digital quagmire? May be we must co-ordinate and rationalise the type of competition that must exist in the fibre market in order not to repeat what we have in our satellite space. Competition is our satellite space segment and monopoly in the fibre undersea cables have not reduced to an affordable level the unit cost of Internet bandwidth in order to generate that critical mass of users. Why is the Internet still a luxury in Africa in the twenty first century whiles the rest of the world is making it a basic utility?

The article reproduced above is by kind permission of the author Eric M. K Osiakwan who is an ICT Consultant and Journalist. He founded the Ghana Internet Service Providers Association and Africa Internet Service Providers Association. He is also a visiting fellow and Scholar at Stanford University's Digital Vision Fellowship Programme and serves on the Advisory Committee of Highway Africa. Please use the links in this paragraph to find out more.  I have added a hopefully appropriate image to brighten up the page.