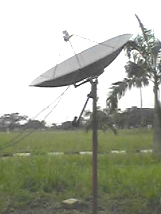 Start: Find you latitude.  e.g. 6.5 deg north.  Input this to the calculator together (optionally) with the longitude, say 3.5.  If you input your longitude put the same figure also as the satellite orbit location as this will give additional azimuth-elevation angles for a hypothetical satellite due south of you.

Example assuming: The results from the polar mount satellite dish pointing calculator say:
The MAIN MOTOR AXIS BEARING angle must be 6.7 degrees.
The SMALL DOWNWARD TILT ANGLE of the dish must be 1 degree.

Viewed from the east, facing west.  The actuator is centralised and the dish is aimed at the highest satellite, due south of you on the same longitude, elevation angle 82.33 deg and azimuth due south ( 180 deg true bearing ).

Moving the actuator either way will tip the dish sideways and downwards towards the east or towards the west.

The dish is attached at B, shown by the blue line.

The dish needs to be tilted down 1 deg by making distance A fractionally shorter than distance C.

Measure B and C, calculate A, and then set A exactly.

The entire head unit must be rotated on the pole and clamped so that it is aimed due south, to the left in the diagram.

In the older image on the right, the top piece is horizontal right now, which is wrong.  Is there any way it can be tilted up on the right hand side?

Does the pink screw adjuster, as suggested in the diagram, exist ?

What are the two apparent "end of bolts", as marked, for ?

Is the main axis bearing line along the green line or does the mount rotate above an axis line higher up ?

More news when we hopefully get it to work !!

Eric Thanks. I tried out what you said and presently get about 100 FTA stations (whoa) while about 30 are scrambled.

Thanks once again. I hope others use my situation as a case study in setting up theirs. 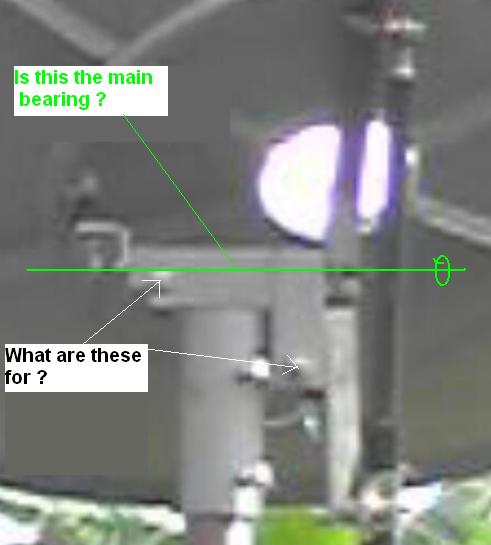 Read below for the satsig forum story behind this page: